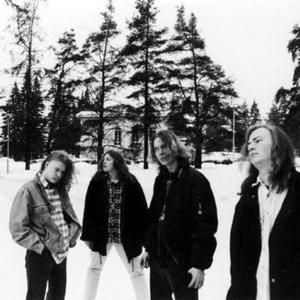 Mordicus started off in 1989 in Joensuu, Finland and their first two demos "Abominations of the earth" (recorded early 1991) and "Grown under shade of sorrow" (June 1991) contained brutal and fast death metal with catchy guitar melodies, riffs, and double vocal delivery. These demos demonstrated the early style of Mordicus which was more grindcore influenced death metal combined with some heavy metal elements.

Soon after the release Mordicus was approached by several underground record labels and as a result the "Three way dissection" 7"EP was released by the American record label Skindrill Records in 1992 (a sub brand of Seraphic Decay Records). For this release three songs from ?Grown under shade of sorrow? demo were remixed with new vocals by Robert.

Their 1992 promo tape brought them to the attention of the French record label Thrash Records, which released the Mordicus' first full-length album "Dances from Left" in 1993. This was a pure death metal release containing ten songs with fast and brutal guitars, melodic styling, and double growling vocals. It was recorded in the well-known Tico-tico studios by Ahti Kortelainen and the band was very satisfied with the end result, and the album was well accepted by the press and audience.

Towards the end of 1993 the US label Wild Rags Records released the promo 1992 on cassette EP format, giving it the title "Wrathorn".

During Mordicus' short history the band progressed and their sound changed from release to release, and in 1994 the band members felt that it was time to move on to a new direction. With the addition of Aapi the new bass player and Robert concentrating only vocal delivery some hardcore and thrash elements were added to the Mordicus music. The first promotional tape with this new five-piece line-up was recorded in 1995.

In late 1999 Mordicus recorded in the Headcase and East-Voice studios a selection of 15 songs, that would have been featured in their second full length album. The album's mastering took place at the Finnvox studios in Helsinki. There were delays in releasing the album by record label and some time after finishing with the album, the band felt like it's time was over because of the lack of motivation and quietly disbanded somewhere in 2000. Heikki and Jani formed Scalping Screen, and Isto later joined forces with Helsinki based Demolisher. ?Disintegration Groove? album has not been released until this date.

Abominations Of The Earth