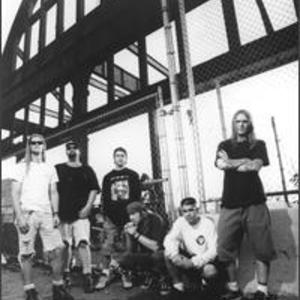 Formed in Canada in 1991, Monster Voodoo Machine was the modern metal brainchild of Toronto musician/vocalist Adam Sewell. The singer culled the ranks of bands such as Tatentanz and Backlash to create the first band lineup consisting of Mark Gibson on guitar, Drew Gauley on drums, and bassist Terry Landry. This particular set of musicians released the group's first recording, Burn in November of 1991 on the local independent label Epidemic Records.

This debut EP made plenty of waves around the band's hometown and throughout Canada, yet Monster Voodoo Machine would endure several tours and lineup changes before a second release could be made a reality. As the group's touring became more successful, the outfit grew figuratively and literally as second guitarist Dave Rose and keyboardist Stacey Hoskins were added to the lineup -- no doubt to thicken the group's already dense industrial metal sound. As the band prepared for their first major-label release, several more lineup changes slowed down their performing and songwriting progress. Both guitarists Gibson and Rose were replaced by Jason Cuddy (previously of Mundane) and Darren Quinn. Gauley also left after many tours in support of Burn. The drummer was replaced briefly by Dylan Huziak and then Dean Bentley came on solidifying the band's most successful lineup. This group then released the their second EP and major-label debut State Voodoo/State Control in 1994 for RCA Records, and later that year the first full-length disc Suffersystem. Both releases offered an updated, mechanized sound comparable to, but much heavier than more successful industrial metal artists of the era, like White Zombie and Ministry. Tours with Life of Agony and Marilyn Manson followed as Monster Voodoo Machine truly began to build national momentum, and in 1995 Suffersystem won a prestigious Juno Award for best hard rock album. Just when things seemed to be going along nicely for the band, Landry and Hoskins parted with Sewell and company. The two were replaced by Soulstorm members Nick Sagias (keyboards) and bassist Chris Harris. In 1996, after releasing 2000 numbered copies of Pirate Satellite, an "officially leaked demo," Monster Voodoo Machine announced that they were breaking up. Perhaps not so surprisingly, the group reformed in 1997 without keyboardist Sagias who went on to reform Soulstorm. The group began touring again and in 1998 released Direct Reaction Now for Doctor Dream Records. Practically void of the industrial stylings that had greatly contributed to the band's mid-'90s sound and success, Direct Reaction Now failed to re-ignite Monster Voodoo Machine's fan base and in 1999 the band called it quits for good.