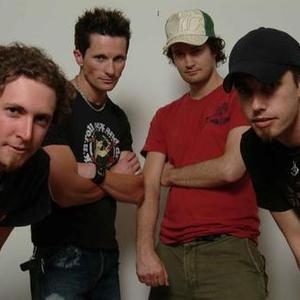 Monkeybone are self appointed vigilantes on the front line of the war against prefabricated pop and the glorified karaoke of the Idol series, which has infected the music industry like a festering pus-filled abomination. These maverick renegades will stop at nothing until every last punter is tearing the paint from the walls, rocking in a funk fuelled sexual frenzy. With Mark Wells (ex Ronnie Wood Band), Jeb Cardwell, Andrew Alig and Clay Williams, Monkeybone dishes out an explosive mix of high volume rock, funk and rap with no sacrifice to melody.

Monkeybone's debut album "Anthology" was recorded in Ronnie Wood's personal studio in London and Psi Fi Studios in Brisbane, and was mixed in London by Mark Wells & Stereophonics producer Steve Bush and in Brisbane by Mark Wells. Also available for demolitions. (Disclaimer: Monkeybone take no responsibility for anything, anywhere, anytime, ever.) "..Monkey what?.." - New York Times "..'Monkeyburn'? ..no it doesn't sound familiar to me, but I could check with the reviews editor.." - Rolling Stone Magazine, USA "..Never heard of them.." - Washington Post "..Who?" - Daily Mirror, UK