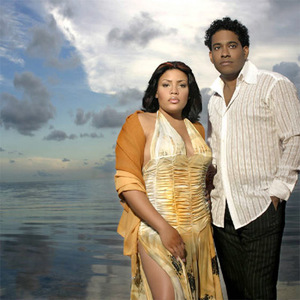 Monchy (Ramon Rijo) and Alexandra (Alexandra Cabrera de la Cruz) are two Dominican bachata artists. They have been singing together as a group for more than five years. They have had several major hits, including La Otra (2007), No Es Una Novela (2006), Perdidos, Hasta El Fin, Yo Sin Ti Y Tu Sin Mi, No Me Pidas (2004), Polos Opuestos (2003), Te Quiero Igual Como Ayer, Dos Locos, Cuando No Se Puedo Olvidar (2002),Hoja en Blanco (1999), Pas?on, and Llorando Penas (2001). In September 2008, the band broke up. According to Monchy, the break up was Alexandra's decision.

In September 2008, the band broke up. According to Monchy, the break up was Alexandra's decision.

The Caribbean sound of bachata blended with a touch of romanticism. It is the perfect combination to showcase the interpretive abilities of the duo known as Monchy y Alexandra. This young duo hailing from the Dominican Republic in the Caribbean is at the forefront in bringing the world the music known as bachata.

This history making duo is made up of Ramon E. Rijo, better known as Monchy, and Alexandra Cabrera. Rijo was born September 19, 1977. From an early age he studied piano, guitar and singing. He was destined to become a success in the music industry. He first performed in a group in the Dominican Republic; this earned him a place in the recording of the Bachatazos series of releases. This success set the wheels in motion for him to find a partner for the follow-up release to come.

The feminine side of this duo belongs to Alexandra Cabrera, born October 19, 1978 in Santo Domingo, Dominican Republic. She always loved to entertain her family even as a young child, interpreting well known songs that were both classics yet sang in a popular style that displayed her talented voice and distinctive styling. She attended a university in 1998, but her studies were put on hold when the opportunity arose to audition for arranger/producer Martires De Leon and executive producer Victor Reyes, who were looking for someone to pair with Monchy. Alexandra won and began the duo that would become Monchy & Alexandra.

Today this duo has sold over 500,000 copies worldwide of the releases Hoja En blanco, Unplugged, Confesiones, and the mix album. In their short career, Monchy & Alexandra have been recognized by some of the most prestigious organizations of the music business. They have been nominated for Billboard Latin Music Awards, Premios Cassandra, Premios Lo Nuestro and a Latin Grammy. This duo, in a short time, has made its impact on the Latin music world and continues to set the standard for bachata world-wide.

Monchy y Alexandra has maintained the feeling of romantic bachata with slight influences of other rhythms such as Antillean music, rock, and Arabian music, as well as authentic folkloric rhythms of their homeland, the Dominican Republic. In their own words, "Our objective is secure, to provide music with a positive message to our generation and at the same time expand Bachata to places where it is not yet known."[citation needed]

The duo recently performed with Salvadoran singer Alvaro Torres, He Venido A Pedirte Perdon, on an album contributing to Mexican singer, Juan Gabriel.