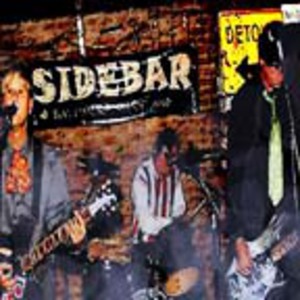 Mod Fun is Mick ?London? Hale (vocals/guitar), Bobby ?Werner? Strete (bass/vocals) & Chris Collins (drums/vocals). Mod Fun started as childhood friends in early 1979 and counted a lot of FM radio rock and early punk among their influences. In the early 80's they discovered The Jam and tried to pick up where the British neo-mod/punk band had left off. This was evident as the band began performing at local nightclubs in the NYC/NJ area, decked out in black suits, skinny ties and two-tone shoes as they blazed through their high-energy sets.

In 1984 They released their first single - ?I Am With You? b/w ?Happy Feeling? on their own ?New Records? label. Interestingly, these tracks were ?fuzzed out? homages to the 60's psychedelic garage scene and foreshadowed a change in Mod Fun's sound as they discovered more of the classic artists who had influenced The Jam. Appearing frequently at such NYC clubs as CBGB, The Dive and R.T. Firefly, Mod Fun signed a record deal with NYC's Midnight Records on which they released their first album - ?90 Wardour Street? to rave reviews in 1985. Their live shows were still high energy spectacles that have been said to have influenced many who saw them to start bands of their own. In fact, it has been noted that they preceded Nirvana and Green Day by nearly a decade with their 3 piece high energy, sometimes reckless and destructive, sets.

On the strength of their single and album, Mod Fun set out on their first U.S. tour in 1985 , playing gigs on both coasts, with the bulk of their performances in California. One notable show was at The Cavern in Hollywood, CA - with Bangles singer/guitarist Suzannah Hoffs and 3 O'Clock guitarist Luis Gutierrez in attandance. On that same tour, the band also appeared at San Diego's Rock Palace with local mod gods Manual Scan.

After returning from the tour, the band released a 3 song EP called ?Hangin' Round? on their own ?Makin' Tyme? label. This 3 song EP brought them praise from many well known NYC musicians and producers who were beginning to take notice of Mod Fun's influence on the local scene. Subsequently, they signed to NYC's Cryptovision Records label. The band then recorded material for a single and a second album ultimately entitled ?Dorothy's Dream?.

In the Spring of 1986 Mod Fun (who had taken to referring to themselves as ?The Mod Fun?) set out for their second U.S. tour which was much more extensive than the first and brought them to many more cities across the U.S. It was during that second tour that ?Dorothy's Dream? was released to critical acclaim. After returning from the second tour Mod Fun continued to appear locally in NYC/NJ including a sold out show at Maxwell's in Hoboken, NJ. Local periodicals often featured articles on the band as talk began surfacing of Richard Barone of The Bongos or Peter Zaremba of The Fleshtones producing their next recordings. It has been reported that Thurston Moore of Sonic Youth and Jello Biafra of The Dead Kennedys were also fans and interested in working with them as well.

In the Spring of 1987 Mod Fun set out on a European tour that brought them to such places as Bern, Switzerland; Vienna, Austria; Rimini and San Marino, Italy and Hamburg and Berlin in Germany. It was in Berlin where tensions in the band forced them to call it a day and they broke up after their final show in that city.

Soon thereafter, Mick and Bobby formed Crocodile Shop but soon reconciled with Chris Collins who served as recording engineer and sometime-performer on that band's early records.

In 1995 Get Hip Records released a retrospective of most of the band's recorded output called ?Past Forward?. In 2004, just as Get Hip had reissued that CD, Mod Fun played a very successful reunion show at The Saint in Asbury Park, NJ. The show was well received and attended and inspired Mod Fun to continue on where they left off. Over the last few years Mod Fun has played extensively in the NYC/NJ area as well as hitting the road for cities such as Philadelphia, Nashville, Baltimore, Annapolis, and Chicago.

In 2007 they released a new CD (again on their own ?Makin' Tyme? label) called ?Now?and Again?. A double length CD with 10 new original songs and 10 rerecorded classics from their 80's catalog, it also includes a live version of ?I Believe? recorded at their highly successful July 2006 show at CBGB. The CD has received widespreadcritical acclaim and has been said to be their best recording to date.

Mod Fun is currently recording material for another new CD and playing extensively in the NYC area.