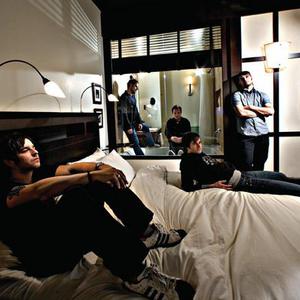 Mobile is a Canadian Alternative Rock band from Montreal made up of Mat Joly (vocals), Christian Brais (guitar), Pierre-Marc Hamelin (drums), Dominic Viola (bass) and Frank Williamson (guitar). Their debut album, Tomorrow Starts Today, was released in 2006. The band was nominated for two Juno Awards in 2007 and went on to win the award for "New Group of the Year". Hamelin left the band and is replaced by Martin Lavall?e.

The band entered the studio with producer Jeff Saltzman in December 2007 to begin recording their second studio album, Tales from the City; which was released in the fall of 2008. After signing with Bieler Bros. in the US, the band re-released, Tales From The City in 2009; which featured three b-sides and a re-recorded version of "Dusting Down The Stars".

Tales From The City