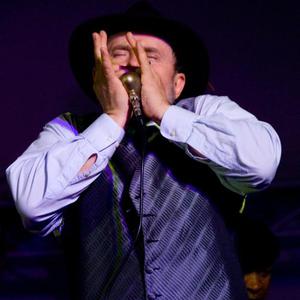 BIOGRAPHY: TRADITIONAL BLUES WITH A UNIQUE SOUND. . . As band leader and composer, Pierre's vision has never wavered since he founded his band in 1991. His mantra is clear and focused: the band is bigger than the sum of its parts, all musicians must love to play together, all are featured and all contribute on stage and in the studio. So Pierre's various line-ups have always been known for performing together with infectious pleasure; there is a joy and there is a liveliness about this band that defines what Pierre is trying to do and that defies all blues cliches.

It is fresh and it is soulful...

Yet his blues are traditional because they are steeped in the old sounds from the Mississippi Delta and in their evolution into the Chicago style of blues of the golden 50's: Muddy Waters, Howlin' Wolf, Jimmy Reed, Jimmy Rogers, Sunnyland Slim and all the great harp players... Big and Little Walter, The Sonny Boy Williamsons, Junior Wells, George Harmonica Smith, as well as many extraordinary contemporaries such as Kim Wilson, Rod Piazza, Paul deLay, William Clarke...


MISSISSIPPI HEAT emerged in 1991 on a night at the Cafe Lura in Chicago 20 years ago. Guitarist Jon McDonald invited Pierre to play harp for him with Robert Covington on drums and vocals and Bob Stroger on bass. Bob and Robert had been the rhythm section for Sunnyland Slim for years with Steve Freund on guitar and Sam Burkhardt on saxophone. It was a great night with a raucous blues crowd in this wonderful Polish neighborhood. Pierre looked so happy, and the band played with such inspiration that his brother Michel offered to find them gigs. And so the band was born.

Almost twenty years later, Pierre and his Mississippi Heat have now recorded 9 CDs and in 2002 Delmark Records produced a DVD of the band performing with Lurrie Bell as a guest at a well-known Chicago blues club called Rosa's Lounge.

Very recently, on October 28th, 2010 the band was awarded BEST TRADITIONAL BLUES CD OF THE YEAR for their CD, Let's Live It Up. This award was given by thebluesblast.com magazine at a ceremony at Buddy Guy's club in Chicago.

MISSISSIPPI HEAT has been the subject of several TV and movie features. ARTE produced a documentary on Blues that features Deitra Farr with the band. French Canadian TV also featured Pierre and his brother/manager Michel on one of their regular programs called BAISERS D' AMERIQUE. This half-hour segment was part of a series that aired in 35 countries simultaneously.

LATEST CD: Let's Live it Up won BEST TARDITIONAL BLUES CD OF THE YEAR (2010)
Let's Live It Up is Mississippi Heat's third recording for Delmark, and 9th overall since this unique band formed in 1991. This diverse, but cohesive ensemble recorded 13 new original songs, eleven by leader and tasteful, creative harmonica player Pierre Lacocque, and a right on cover of Sugar Pie DeSanto's catchy Veltone/Chess classic ?I Want to Know!? They are fortunate to have not only one, but two of the blues world's premier guitarists/singers adding their immense talent? John Primer and Carl Weathersby!!

Muddy Waters' last guitarist, John ?The Real Deal? Primer sings and plays on 3 cuts, including his original, ?I Got Some News Today.? Another legendary Chicago area blues guitarist and part time member, Carl Weathersby and his powerful Albert King influenced guitar blasts can be heard throughout. Sensational vocalist Inetta Visor returns as lead singer on 10 tunes, including her deep, intense original, ?She Died From A Broken Heart.? Newest Heat member, fantastic singer Rhonda Preston (Black Ensemble Theater) also contributes greatly to Pierre's original, ?Daggers & Spears? where she talks about ?the Devil having a field day? with her! Keyboard whiz Chris ?Hambone? Cameron (check out his website for his incredible resume'!), veteran blues trumpeter Kenny Anderson and the Chicago Horns, and percussionist Ruben Alvarez all add much texture to the Heat. Special mention must go out to killer lead/rhythm guitarist Giles Corey (Lubriphonic) and the rhythm section of bassist Stephen Howard (Bo Ramsey, William Elliot Whitmore) and Blues Music Award winner Kenny Smith on drums for their essential contributions.

From the earliest days of Mississippi Heat it was Pierre Lacocque's intention to assemble a group of the best Chicago blues veterans around to play original music in the tradition of the great Chicago blues bands of the 1950s. Mississippi Heat has gone through a lot of changes, but certain elements of the band's winning formula have remained constant: Pierre has remained the driving force behind the band. One of today's tastiest Chicago blues harp players, Pierre has a knack for soulful melodies, tone, and phrasing! His harmonica playing is rooted in tradition but is always fresh and void of cliche's.

Let's Live It Up!

Thunder In My Heart