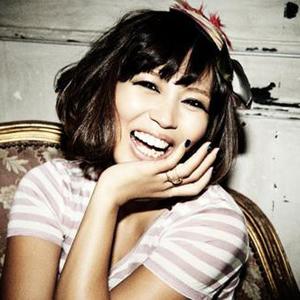 Born in Osaka, Japan in the December of 1975; MINMI (???) started her musical career around 1996 by performing at ruba dub showcases and hip hop events at the clubs in Osaka, and also started to make her original tracks around this period. Soon after, MINMI's name was well known in the club market, through her live performances in the club events, and she participated in the works of the label of the Japanese Big Sound like Red Spider and Mighty Jam Rock. Those CDs became a hit, not only in a Reggae market but also the Hip Hop market.

With much expectations, MINMI has made the artist contract with JVC, and MINMI's first Maxi Single "The Perfect Vision" was released in August 2002. And this single was well accepted by the radio stations, as shown by the figure of 20 FM stations heavy rotated the song. As the song gradually became popular in the market, the song started to climb up the Sales Chart over 3 months period, and eventually reached the sales of 400,000 units, an extraordinary figure for a d?but single.

And with the 2nd Maxi Single "T.T.T.", released in December 2002, MINMI has revealed her diverse approach in her music, from the Reggae based 1st single to this time a Hip Hop based track for the 2nd single. And as a result of the newly tasted tracks and the popular melodies blended in her songs, MINMI became the popular figure among the many of female music fans of 10s~20s.

So a long-awaited 1st Album "Miracle" was released in March 2003. Though there was only a limited exposure, the album ranked in the Top 5 of the Album Sales Chart for 2 months period, and eventually the album sales exceeded 600,000 units. This only proved that MINMI's music itself is what the market has desired.

To coincide with the album release, MINMI's first nationwide tour [LIVE TOUR 2003 "Miracle"] took place from June 20, 2003. The tickets were all sold out instantly, and the tour took place in full pack audiences in every venue. She also participated in major concert events in many places in the summer of 2003, and appealed her performance, which was trained through her live activities in the underground music scene.

After that, MINMI has been constantly releasing singles, 3rd Single "Another World" In September 2003, and 4th Single "Ai No Mi" in March 2004. She has blended the latest music trend with the Japanese popular music trend, and now, she is known as the major artist in the Japanese music industry with plenty of Black music and Dance music essence, who does not belong to a specific musical genre.

Regarding her production, MINMI is rare artists in that she basically does all the songwriting (including the lyrics), arrangements, produce works, and making tracks. Her production is so highly accepted in the industry that she is now getting the offer of the production for the other artists. And also, many of the leading musicians and the engineers from Jamaica, home of Reggae music, and the United States, home of Hip Hop and R&B music, participate in her production which is the key factor of blending the latest music trend and making a high quality music.

On June 30, 2004, her long anticipated 2nd album ?imagine? was released, which coincided with the nationwide live tour ?MINMI LIVE TOUR 2004 ?imagine? ?, started on September 10, 2004. In December, she released her 5th single ?Are yu ready?. The song was originated from MINMI's original riddim ?SAKURA? which contains a sample of Japanese traditional guitar, Shamisen. This riddim ?SAKURA? became popular in Jamaica as well. From this point, the produce team ZAREK for TSURU-KAME Recording, the team consist of MINMI and JUNIOR(Red Spider), who produced the riddim ?SAKURA?, started their produce works in Jamaica. They have produced various Jamaican artists, and released their original 7 inch vinyls in Jamaica in the start of 2005.

She was very active in live performances in 2005, from organizing a monthly regular reggae club event in Tokyo, a nationwide club tour, to appearing in the major summer rock festival ?Summer Sonic? in August. In September, MINMI released the album ?FRIENDS?, the best selection compilation album of her featured works.

In 2006, MINMI's single ?Summertime!?, the song based on a Soca rhythm, had a big reaction in Trinidad & Tobago, the home of Soca. In February 2007, she was invited to Trinidad to perform at the Bmobile International Soca Monarch Competition, where she did a live performance in front of 30,000 audience, and fascinated everyone who saw her performance, including Wyclef Jean of the Fugees. In March, MINMI released a long-awaited 3rd album ?Natural?. The album proved that MINMI is not just another a Reggae Diva, but is capable of diverging into many music genres.

MINMI's nationwide tour entitled "Natural Mystic" & "Natural Showcase" coincided with the release of "Natural", and ended successfully, selling out all the dates. In the summer, MINMI appeared in the major rock festival "SUMMER SONIC'06" as the headliner, only Japanese artist to headline in the Festival ever. In Sept. 2006, MINMI was nominated as the Best New Artist of SOCA AWARDS, took place in New York,
as the only Japanese artist ever to be nominated in the Awards. She was the center of the attention of the worldwide media.

In 2007, MINMI participated in the Trinidad Tobago Festival for the second straight year.
MINMI recorded the new Soca tune "Sha na na ?Japanese Wine?" a collaboration with Machel Montano HD, known as the "King Of Soca", to coincide with this year's Festival.
Machel was the person responsible for bringing MINMI over to the Festival the previous year.
This year, they got together to record the new tune just in time for this year's Festival.
And "Sha na na ?Japanese Wine?" is included in Machel's new album "Book Of The Angels"
was just released in Trinidad Tobago.

Also, in this year's Festival, MINMI participated in "Soca Monarc", a competition for the local major artists.
She became the first Japanese artist ever to win in the preliminary round and advance s into the final round of the competition. She performed on the National Stage, in front of the audience of over 30,000 people, and MINMI became the first Japanese artist ever to make it into the Best 8 of the Competition. She was Best 3 artist among the female artists in the Competition.

During her month long stay in at the Festival, MINMI was the center of attention of the local media,
including TV programs, newspapers, and magazines. And MINMI performed in front of over 100,000 audiences in total in Trinidad Tobago this year.

MINMI's activity has no limit, in Japan nor abroad, and will keep on going beyond everyone's expectations in the future to come.