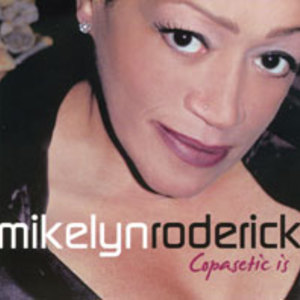 Mikelyn Roderick is not a newcomber to the music industry,as she recorded a version of the Blue Magic R&B hit ballad "SIDESHOW" on Beacon Street Records when she was 19. It was then that she met and worked with writer producer Jon Lind as a demo singer. She has worked as a background singer with many musical greats including Stevie Wonder, L.A. Jazz Allstars, David Foster, Rahsaan Patterson, Kirk Franklin, Quincy Jones, Mr. Bill Withers, and the late Mr. Barry White.

During the eighties, Mikelyn was a member of the musical group "BY ALL MEANS". The group shared great success in the United States, Europe and Japan. As co-writer and the only female member they recorded a remake of the Marvin Gaye hit "Let's Get it On". The popularity of this song was directly influential in furthering the campaign to give Marvin Gaye his long overdue star on the Hollywood Walk of Fame. She has shared her talents as a songwirter on various projects such as Rashaan Patterson's debut album as well as his current "After Hours". Along with Rahsaan and producer Jamey Jaz she co-wrote the hit single and titled cd "Back to the World" for Tevin Campbell. She also worked with HALLE BERRY as a singer in the HBO acclaimed film "THE DOROTHY DANDRIDGE STORY". For the past seven years Mikelyn has enjoyed success as a jingle session singer, and can be heard on commercials for Sears, Levi's. Nissan, Uncle Ben's, Burger King and Nike. In 2006 she finished a successful run of the hit play 'CROWNS". She recorded and performed as a featured vocalist on James Days "Remember When" as well as opening for the amazing Frank McComb at the Cafe De Paris in London. "COPASETIC IS" marks her first solo project on Dome Records. ENJOY!!!!!