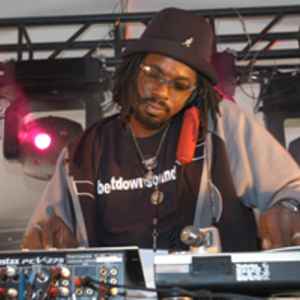 Today, Mike has been dubbed Detroit's ?Ambassador? among the city's underground music community and those that know him well. This is exactly what makes the Agent the essential DJ. His level of understanding and appreciation in the industry places him at an immediate advantage ? one could say that Clark is the anthropologist of the dance floor. Born on the north-end of downtown Detroit and raised on the West side off the infamous 7 Mile Road, to an energetic mother and musical father he was surrounded by the electrifying energy of the Jazz, Funk and the Disco era.

Heavily influenced by this at the early age of 13 Mike took a serious interest in the DJ world.
As the 1980's dawned it was the competitive nature around this time that pushed Mike. His older brother began sneaking him into the hottest local dance clubs and Mike would spend much of his time playing backyard, underground parties and battle his peers in full on exhibitionist turntablist showcases where eventually fast coming up behind his peers he played with the best of them in legendry discotheques such as, L'uomo, Cheeks, Studio 54 and the Park Avenue Club after joining forces with the then well known Direct Drive DJ Collective being one of their youngest members. In the mid-80's, Clark spent time studying Detroit's legendary ?1st Dj? Ken Collier also two New York icons Tony Humphries and Larry Levan. Mike travelled back and forth discovering the Chicago House Scene and the famed club ?The Warehouse? meeting Ron Hardy and building strong bridges with the windy city's Hotmix 5 of which Farley Jackmaster and Julien Perez was two of Clark's favourites and a permanent influence on his spinning goals. So merging this fast growing Chicago style with the Euro-disco and progressive sound popular in Detroit, by the late 80's Clark became a major figure in the birth of ?Detroit techno' alongside other DJ's such as Derrick May, Juan Atkins, Kevin Saunders, Blake Baxter and Eddie Fowlkes.
During this exiting era of innovative discovery, Mike began producing and remixing. He teamed up with Mad Mike Banks group ?Members Of The House' to form the alias Underground Resistance label which became ?Members Of House? singing group, which very clearly stood shoulder to shoulder with Ten City as one of the first two ?House? music groups in history. Clark suddenly elevated his presence in Detroit, once again becoming one of the city's most prolific DJs and producer now known as ?Agent X' beginning his Dj journey around the globe. A few years later in the late 90s mike joined forces with Carl Craig's Planet E label. The result of this would be the smash hit EP ?In the morning? which would yet again catapult his Career across the Atlantic into Europe and as far as Japan.

Beatdown Sounds was born in the turn of the millennium. A term used by his local peers and founded by Mike Clark ?Beatdown? is the true sound of Detroit, a coined phrase that refers to the urban house sound and that Detroit is not just about ?Techno? or rather that ?Detroit Techno? really means term for how modern, forward Detroiters have embraced but kept their roots from Jazz to Motown to Funk to Today and created a new sound that mesh all of these and spits out tomorrow.
Beatdown sounds launched their first residency at Club OneX on Michigan Ave in Detroit's Cork town neighbourhood. This is where House Heads and dance addicts could receive a proper ?beatdown? each week. Later on Rehab at Agave became the one of the longest running and popular nights in the Deep House history of Detroit electronic music. In 2005 the Detroit Beatdown Dj's took the sound across the pond and smashed it in Japan, Glasgow, London, Berlin and Paris. Since then one of the world's premier nightclubs, Fabric in London has had them back every three months and every time has been the same, off the hook that undeniable heavy bass line rhythmic sound that is Beatdown. The label, Strictly Beatdown uses the talents of Detroit musicians, artisits, singers and producers and together has worked with the likes of London Based label Third ear and put out a successful series of Beatdown compilations and remixes.
Mike Agent X Clark, a native Detroiter, founder of Strictly Beatdown and Beatdown sounds has worked with major dance labels such as UR, Nite Groove, Happy, Simply Soul, Planet E, GotSoul and Third Ear to name a few and a Dj true to his craft is now back by popular demand and across the sea's into the UK and Europe once again. With projects on the horizon with UK producers it looks like a promising future for his already established label Strictly Beatdown.

Beauty In The Still