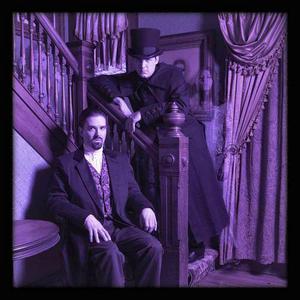 Formed in 1996 in Cleveland, Ohio, Midnight Syndicate's gothic, horror, fantasy "soundtracks for the imagination" CDs feature a blend of neoclassical darkwave, dark ambient, and movie score-style music and sound effects. Consisting of composers Edward Douglas and Gavin Goszka, they are most known for their musical contributions to the holiday of halloween, and halloween music as well as to the haunted house, amusement park, and roleplaying game industries.

Their music has been sampled by horrorcore artists like Insane Clown Posse, Twiztid, and Three Six Mafia and has been used in concerts by King Diamond and the Misfits.

Synonymous with the Halloween season and the haunted attraction industry, Midnight Syndicate is heard every October from Universal Studios Orlando, Warner Brothers, and Six Flags theme parks to haunted attractions and homes across America and around the world. In September of 2009, AOL released a list of the Top 10 Best Halloween Music CDs as ranked by AOL/CBS Radio listeners. Three of the ten CDs were Midnight Syndicate discs (#8, #4, and #3) ranking only behind Danny Elfman's Nightmare Before Christmas and John Carpenter's Halloween soundtrack.

Composer/filmmaker Edward Douglas founded Midnight Syndicate in 1996. In 1997, its self-titled debut was released with the majority of music on the album written, arranged, and performed by Douglas. Contributors included Scott Angus, Mark Rakocy, Dennis Carleton, Jamie Barbour, Ray Portler, the rap act Dark Side, and Christopher Robichaud. Douglas coined the term "cine-fusion" to describe the album. Cine-fusion is described in the album's liner notes as

"a blending of movie soundtrack music and pop music... a compilation of soundtracks to movies that do not exist. The goal of the music is to stimulate the imaginations of listeners so that they are able to transport themselves to worlds or movies of their own creation."

Musically, the album contained an eclectic blend of styles including everything from dark neoclassical instrumental music (of which three tracks appeared on future releases), rock], techno, rap, and space. Movie-style sound effects were employed in many tracks. In March 1998, a multimedia show was produced by Douglas and his company, Entity Productions, to support the album. The show included a blending of original short films, live music, animation and stage performers.

In 1998, Douglas teamed up with gothic fantasy artist Joseph Vargo, and the two decided to create an exclusively dark-themed instrumental Midnight Syndicate album. Composer Gavin Goszka, formerly a solo artist in a project called "Lore,"also joined Douglas and Vargo in the new Midnight Syndicate line-up. Together, they created Born of the Night, a groundbreaking album that appealed to fans of gothic music, the horror genre, and haunted attractions. Douglas and Goszka wrote, arranged, and performed the music on the album while Vargo served as executive producer of the project, writing and performing the vocals and narrations, and designing the cover art and packaging. Born of the Night was independently released in September 1998 through Vargo's Monolith Graphics and Douglas' Entity Productions, hitting the horror market just in time for the Halloween season. It was Midnight Syndicate's first critically acclaimed gothic-horror soundtrack and proved to be an instant success, establishing Midnight Syndicate's trademark sound.

In March 2000, Realm of Shadows followed suit with the same flavor of dark instrumental music and another gothic setting. Both albums were featured as official soundtracks for Universal Studios' Halloween Horror Nights, and used in several other major theme parks during Halloween, such as Busch Gardens, Cedar Point and Thorpe Park's Fright Nights event. The heavy metal band King Diamond also featured tracks as opening music for their 2000 US tour. Afterwards, Vargo and Midnight Syndicate chose to work separately of one another on future projects.

In 2005, they released their seventh CD, The 13th Hour. It featured vocal effects by Lily Lane of the horror-rock band Lazy Lane and another cover by Keith Parkinson. The album won the Origins Award for Best Gaming Accessory presented by the Academy of Adventure Game Art & Design, marking the first time a role-playing soundtrack or music CD has won the award.

Out of the Darkness - Retrospective: 1994-1999 was released in 2006 and featured re-recorded versions of tracks from Midnight Syndicate, Born of the Night, and Realm of Shadows, along with some of Edward Douglas' early horror film scores. Fantasy artist Rob Alexander designed the cover for this release.

In 2008, Midnight Syndicate released the score to Robert Kurtzman's film, The Rage: Original Motion Picture Soundtrack, which was released in February of that year. Additionally, Edward Douglas completed post-production on his horror suspense film The Dead Matter, which he directed in August of 2007. The Dead Matter is a remake of a 1996 movie by the same name that was filmed on a very small budget and was co-written (with Tony Demci), directed, and scored by Edward Douglas. The movie stars Andrew Divoff, Jason Carter, and Tom Savini and was released in 2010.

In August of 2008 Midnight Syndicate released a The Dead Matter: Cemetery Gates, which featured music inspired by the movie. It yielded the band's first two official music videos for the songs Dark Legacy and Lost respectively

In early July 2010, the band teamed up with vocalist Destini Beard to release The Dark Masquerade, ]. This six-song EP features existing Midnight Syndicate songs blended with operatic vocals and haunting lyrics written performed by Destini. The success of this EP lead to the production of a full-length followup CD entitled A Time Forgotten. Set within the walls of a haunted Victorian hotel, the disc was released in August of 2012. Later that July, the band released The Dead Matter DVD, The Dead Matter: Original Motion Picture Soundtrack, and their Halloween Music Collection CD, which is a compilation of some of the band's favorite tracks from their first thirteen years.

In August of 2011, the band released their fourteenth studio album, Carnival Arcane. The narrative of the disc surrounds the Lancaster-Rigby Carnival, a turn-of-the-century traveling circus with more than a few skeletons in its closet. Inspired by historical research into carnivals of that time period and the writings of Ray Bradbury, the disc features the band's most intense sound design to date. "We wanted to push the boundaries on this disc. For a band that's made a career of making "soundtracks to imaginary" films, I think this one feels more like a movie than anything we've done to date," said Edward Douglas. "Definitely the most complete and intricate soundscape we've ever produced. You can practically smell the popcorn and Fairy Floss (cotton candy)," said Gavin Goszka. "There's also a tremendous amount of variety. There are moments where I think the listner will find themselves caught up in this strange sense of wonder and macabre fascination, and others that will leave them shaking in their boots. We were able to expand our instrument roster on that disc in ways that we'd only touched on before." Within months, Carnival Arcane became the band's most critically-acclaimed disc to date, garnering rave reviews from press and fans alike. In 2012, it won Best Horror CD / Soundtrack at the horror community's 10th annual Rondo Hatton Awards.

In August of 2012, the band announced that they had completed the score to the upcoming grindhouse thriller, Bunyan (starring Joe Estevez and Grizzly Adams' Dan Haggerty). That same month, they released Destini Beard's A Time Forgotten, Destini Beard's full-length followup CD to The Dark Masquerade that takes listeners behind the room walls of a haunted Victorian hotel. Production on the next Midnight Syndicate disc is well underway. Although details have not been released, it was announced that the new disc will classic horror theme inspired by the early Universal and Hammer Films.