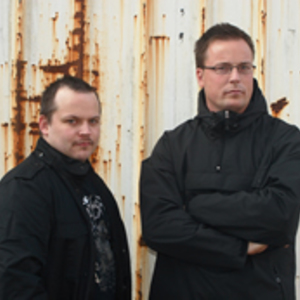 It started out back in the early 90's, when Jonas and Peter met up with Jesper to share and talk about "synth-music". They got together, started writing songs all just for fun, and recorded some demos that they have up to date kept for themselves. They really didn't take anything that seriously, they just liked to make some good noise from the keyboards. This went on for a couple of years, but in 1999 it was decided that they should go into a studio and make a demo wich featured the song "Miseries" among a couple of others.

This went on for a couple of years, but in 1999 it was decided that they should go into a studio and make a demo wich featured the song "Miseries" among a couple of others. At that stage they hadn't decided wich one of them who would be the lead singer of the band. After a little twisting and turning it was to be found that Peter Ehn was the right choice. And today, Peter, with his warmth and depth, really brings out the best of the songs. Nothing happend with the demo, but they decided to go for it again, at Crimson Productions.

Jonas had been away for half a year, but came home with some fresh ideas that was put together in the computer. So they recorded "So Astray," "Want, Need, Me," and "Domination" and came in contact with the record label of Memento Materia. They invited the guys to a contest, where the winner would end up with a contract. And as it turned out well they were signed by Memento Materia from then on.

In autumn 2002, the first album "Graceful And In Sin" was finished, and has been out on the market since the 27th of Jan 2003. In 2004 firstly a CDM called "Red Dawn" was released followed by their second album "Ultimate Sky". After signing up with Infacted Recordings they re-released that album in 2005 with three additional bonus tracks.

Graceful And In Sin