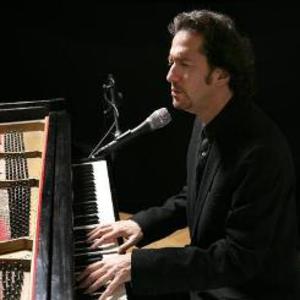 (1) Michael Wolff is a genuine hipster ? a Manhattan-based family man and internationally acclaimed pianist-composer-bandleader. Michael got his start recording and performing with Cal Tjader, Cannonball Adderley, Wayne Shorter, Nanyy Wilson and Warren Zevon. He was the musical director of the Arsenio Hall show and has written scores for movies and television. His late night, blue light singing on Love and Destruction, his tenth album, brings new cool to an inspired selection of rock-pop classics as well as his own tunes about the well-lived life.

Appearing on the CD is Wolff's own band Impure Thoughts, an infectious improvising richly percussive ensemble, thanks to Indian tabla player Badal Roy, drummer Mike (Headhunters) Clark, and electric bassist John B. Williams. Produced and recorded independently Love and Destruction is Wolff's first release on Wrong Records. Over the course of Love and Destruction, Wolff suggests his kinship to Cohen, Donovan, Jagger, Zevon, Mose Allison, Antonio Carlos Jobim, Tom Waits, Randy Newman, Fagen and Becker of Steely Dan and a host of bluesmen. His original, " Falling in Love, " captures the dizzy thrill of a crush-at-first-sight. He deconstructs Radiohead's moody " Everything In Its Right Place, " making subtle reference to Miles Davis's jazz-fusion breakthrough " In A Silent Way?

A baby boomer in his prime, Wolff is renown for his old school jazz roots, melodically fresh and rhythmically compelling multi-keyboard style, and ever-expanding media presence. A New Orleans native who's father taught him blues on piano before he began classical lessons at age eight, Michael also grew up in Memphis and Berkeley, California, getting his first significant professional gig when he was 19 from Latin jazz vibist Cal Tjader. He made his recording debut with Cannonball Adderley's band in 1975, and has worked extensively with the Thad Jones-Mel Lewis Orchestra, Sonny Rollins, Wayne Shorter, Tony Williams, Christian McBride and others including his late friend Warren Zevon and singer Nancy Wilson, for whom he wrote orchestral arrangements and conducted more than 25 major symphony orchestras during world-wide tours. His growing corpus of movie soundtracks includes The Tic Code (2000), a feature for actor-dancer Gregory Hines that was semi-autobiographical in its depiction of the Tourette's Syndrome with which Wolff copes.

His five-and-a-half year stint as musical director of the " Arsenio Hall Show " heightened his visibility and gave him the occasion to meet his wife, actress and writer-director Polly Draper. He is producer, and Draper writer-director of the upcoming Nickelodeon cable tv series " The Naked Brothers Band, " starring their sons Nat, 12, and Alex, nine (Wolff will appear regularly as the boys' " hapless, accordion-playing dad "), and he produced his first music video for Love and Destruction's plaintive " Underwater, " shooting on location in post-Hurricane Katrina New Orleans. Wolff's recent performances include an Impure Thoughts concert at the Royal Albert Hall as part of the BBC Proms, a trip to the British Virgin Isles and several dates in the Midwest, leading to a December 2006 booking at Manhattan's Jazz Standard.

(2) Michael Wolff is also the name of the lead guitarist for the Tempe, Arizona Heavy Metal band Sloth Frenzy, having released one solo album, Gift of Mine, in 1996. Sloth Frenzy broke up in 2000, releasing only one album, Slow Murder.