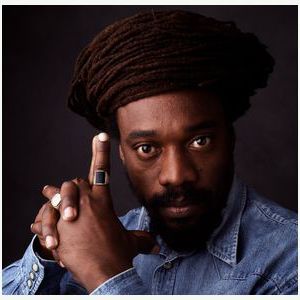 Born in the Western Kingston ghetto of Waterhouse, Jamaica on July 11, 1957 Michael Rose was introduced to music by his brothers, who used to sing around the house. Blessed with a powerful voice he joined a band, doing local talent shows as well as entertaining tourists in the north coast hotels of Jamaica. Returning to Kingston in 1975, Niney the Observer first spotted the potential of Michael Rose and produced first recordings like "Guess Who's Coming To Dinner" and "Clap The Barber" to name a few.

The following year he replaced Don Carlos as the lead singer of a three-piece vocal group called Black Uhuru. Their first full-length recording "Love Crisis", produced by Prince Jammy in 1977, was later remixed and re-released as "Black Sounds of Freedom". Michael Rose had a profound effect on the sound of the group. With his distinctive voice and his powerful, self-penned reality themes, Black Uhuru were to eventually become the Reggae supergroup of the 80's after joining forces with Sly & Robbie and releasing hit-singles like "Shine Eye Gal", "General Penitentiary" or "Plastic Smile" on the Taxi Label. Signed to Island Records in 1980, they recorded highly acclaimed albums like "Sinsemillia", "Red", "Chill Out" and the grammy-winning "Anthem" in 1984.

In 1985 Michael Rose left Black Uhuru to pursue a solo career. After recording singles like "Bogus Badge" and "Demonstration" on his own Grammy Rose label he took a break from the music business, preferring instead to farm coffee on land he owned in Jamaica. It wasn't until he was signed to the RCA label in 1989 that he was heard from again. His pop-oriented debut solo album "Proud" was released the following year in Europe and Japan. The early 90's saw the release of two albums in Japan: "Bonanza" and "King Of General". Most of the tracks from these low-fi recordings were later remixed or re-recorded and reissued worldwide on the Heartbeat label. In 1993 Michael Rose also reunited in the studio with Sly & Robbie, resulting in a string of hit singles including "Monkeys Business", "One A We, Two A We" and "Bad Boys". These recordings also hit the streets in remixed form on the album "X-Uhuru" in 1999 for the french Tabou1 label.

The 1995 released, simply "Michael Rose" titled, album was his first for the american independent Heartbeat label. Produced by Niney the Observer, it contained the smash-hit "Short Temper". Another single, the UK produced "Last Chance" on the Ruff Cutt label, ruled the british charts for several weeks. 1995 saw the release of an album recorded by Bunny Gemini ("Voice of the ghetto" aka "Rising Star") followed by the Heartbeat album "Be Yourself", which contained remixed versions of some tracks from the japan-only release "Bonanza" and previously unreleased material. Heartbeat Records also did a dub-companion to "Be Yourself" dubbed "Big Sound Frontline".

Another album containing unreleased, previously by Jah Screw recorded material saw the light of day in 1996: "Nuh carbon" was licensed to Greensleeves/RAS Records. Teaming up once again with Mafia and Fluxy, who played also on the highly acclaimed "Michael Rose" album, he recorded the albums "Dance Wicked" and its dub companion "Dub Wicked" for Heartbeat. An interesting album that contained vocal as well as dub tracks called "Selassie I Showcase" surfaced 1997 on the european Bakchich label; tunes like the re-recorded "I Love King Selassie" on a sampled "Natural Mystic" rhythm held the grassroots market spellbound. An energetic live album, "Party in Session", was recorded for Heartbeat during his tours across America in 1996 and 1997.

1999 saw the release of the earlier mentioned "X-Uhuru" album on the Tabou1 label as well as "Bonanza" for the Heartbeat label (not to be confused with the japan-only release of the same title). The latter consists once again of previously recorded, remixed or re-recorded tracks as well as new tunes. June 2000 brought another live album on the Tabou1 label, this time recorded back in 1984 with Black Uhuru. After being postponed several times, the album "Never Give It Up" finally hit the stores in April 2001. This Hearbeat Records release consists of self-produced material recorded in Miami/Florida.

Although busy with touring (also with Sly & Robbie) and studio work, Michael Rose hasn't released a full-length album for quite some time. Early 2004 news hit the streets that Duckie Simspon and Michael Rose reunite as "Black Uhuru feat. Michael Rose". Since then, they released their single "Dollars" and performed in various countries. Heartbeat Records meanwhile puts out a "Best of"-album entiteld "Happiness - The Best of Michael Rose" and, in the summer of 2006, Young T/Otis Riddim Records released Jump Nya Benge, on their show-case uPLiFTMeNT album.

Happiness - The Best of Michael

Never Give It Up