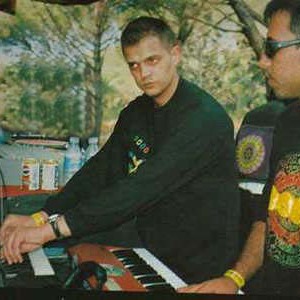 MFG are Aharon Segal (born 1970) and Guy Zukrel (born 1970), both from Israel. Aharon learned to play the organ when he was a kid and was playing keyboards ever since. He also wrote for other instruments as well, though he didn't play them. Guy has a similar background, he took organ lessons when he was 6 years old for 2 years, until he discovered the world of synth & midi. He got his first synth- Yamaha CS01- for his Bar-Mitzva and has been a 'midiman' since.

They met in high school, through a mutual friend who knew of their interest in music, and got them together. They didn't really separate since then. Aharon is a big collector of electronic music (3500 CDs!!!) and they always shared all music discoveries, and experienced the same enthusiasm and changes in their music interest together. They grew on stuff like Depeche Mode, Yazoo, Kraftwerk & The Human Leauge, and later Skinny Puppy, Front Line Assembly, Front 242, Klinik and a lot of others.

In 1995 they decided to write a real electro-industrial album together under the name Message From God. They wrote a few tracks till a friend that was into trance introduced them to a couple of tracks by The Infinity Project (TIP). They were amazed by the combination of sophisticated electronic music and melodies, and decided to write a couple of tracks and see what happens. It didn't take long till they got to Oren Kristal at Phonokol. He introduced them to Let There Be Light by Astral Projection, and they fell in love with this track and with Astral's sound. The outcome was Desert Sun. Oren signed them for 3 albums immediately after he heard that one.

Guy also works solo as Passenger and he released an album- For All Mankind (with one MFG track on it), and together with DJ Eyal Yankovich he released Emuna (BNE)- a more clubby-retro thing.

MFG released numerous tracks on a multitude of compilations, among them:

They also collaborated with others: