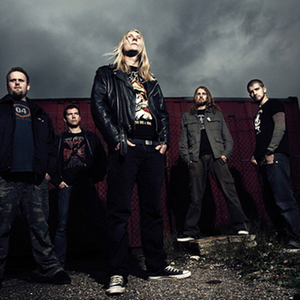 After more than a year's song writing and recordings, Danish thrash metallers MEVADIO are back with the album Fresh Kill Daily. The album is produced by the Danish super producer Tue Madsen (SICK OF IT ALL, HATESPHERE, RAUNCHY) A&R representative for Drug(s) and Target Distribution, Mikkel Wad Larsen, states: ?After a break from each other, it is a pleasure to have Mevadio back in the Drug(s) family.

A&R representative for Drug(s) and Target Distribution, Mikkel Wad Larsen, states: ?After a break from each other, it is a pleasure to have Mevadio back in the Drug(s) family. Mevadio play melodic metal of a rare quality and originality and we believe that ?Fresh Kill Daily? will be one of the most important albums in 2008 within the genre. On a personal note I am extremely happy with Mevadio being my first A&R project at Drug(s)/ Target. They are a band I have known and respected for years?

Morten Kruger, lead singer and spokesperson for Mevadio states: ?Mevadio in 2007 is harder and more aggressive than ever before and all the elements of music really stand out now. The fast parts are faster, the heavy parts are heavier and the melodies really hit hard. All of this is put into a brutal riff-machine, that merciless mixes cult references with SLAYER references. Mevadio is really psyched about the revived cooperation with Drug(s)/Target and our expectations are sky high?.

Danish Modern Thrash metallers Raunchy will enter the studio next summer to record their third album. Raunchy also updated their homepage www.raunchy.dk ? you can find some pictures of their gig at the PopKomm in Berlin, Germany, there now as well as a funny Berlin diary of rummer Morten.