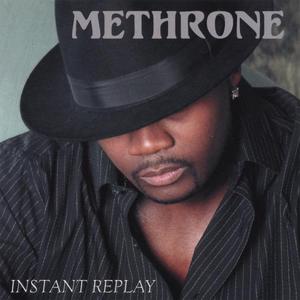 Methrone was born in Plant City, Florida on November 6, 1975. Carlos Methrone Reynolds was given his middle name by his Aunt Mildred. Today his personal manager, his aunt Jaqueline Reynolds, is also a co- executive producer of the CD. Methrone was raised up by his grandmother Carolyn in the sleepy Florida Gulf Coast town, 14 miles inland from Tampa. Methrone was dancing by age five, and began to realize

he could sing at twelve.He spent time in the church choir and entered talent shows covering Michael
Jackson's 'Billie Jean' and 'Beat It,' and New Edition's 'Lost In Love.' By the time he graduated from high
school, he had begun to teach himself piano by ear and learn the rudiments of using a sequencer to program
tracks and cut his first demo, a song called 'Lovely Young Thing.' Having outgrown the Tampa music
scene, Methrone accepted his sister Faye's invitation to move to Atlanta and pursue his music dreams
there. Working on a keyboard at home, he sequenced his music and found a studio where he could dump
the tracks and record vocals. The three songs on his first demo, 'Slow & Steady,' 'Last Time,' and 'Got 2 Go,'
all of which were cut at Sweet Sounds Productions in Atlanta (and remain grouped together on MY LIFE)
attracted a buzz around town.
Working with his personal manager (Jacqueline Reynolds), Methrone soon came to the attention of the
legendary Willie Clayton. Clayton's belief in Methrone is unshakable. His first mission was to get Methrone
to come up with enough additional material to support a full album. He had already written 'Loving Each
Other For Life,' 'You Don't Have 2 Worry' and 'Your Body,' and now followed them up with 'My Life,' 'Hold
Me,' and 'I Wanna Get Freaky,' all six of which were cut at CD 2000 Studios in Atlanta. Willie Clayton stayed
faithful to his word, the album was completed, and soon Methrone was on the road visiting radio stations in
Atlanta, Chicago, Detroit and other major urban markets.
One year later the follow album Picture Me was released.