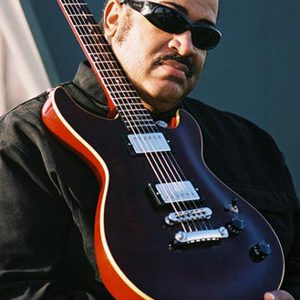 Mem is a former 15-year Bourbon Street cab driver who's since released 4 albums worldwide (2 on Rykodisc, 2 on Shanachie). Mem Shannon & The Membership are from New Orleans and while their music is rooted in the blues, it's soaked through with that Big Easy syncopated sound, oozing with funk. They've played the New Orleans Jazz & Heritage Festival 12 years. They've won or been nominated for a ton of "Best Of" awards for Louisiana music and national blues - including 2 W.C.

Handy Award nominations ('96 and '02). Mem emerged onto the scene in 1996 with his first release, "A Cab Driver's Blues" on Hannibal/Rykodisc. The breakthrough buzz album led to national media coverage from folks like ABC World News, CBS Sunday Morning, CNN, E! Entertainment Television, The New York Times, NPR and a much anticipated/celebrated performance at SXSW. Fast forward to Mem's last release, which included the song "S.U.V." The catchy rant against SUV's and their drivers became a mini-hit at blues radio, syndicated and specialty shows, and even a few Triple-A formats. It was named Song of the Year by Living Blues Magazine in 2002 and received a Handy nomination for the same. Not to mention being added to NPR's great show "Car Talk" and their most recent music compilation.

They've shared bills with John Scofield, Toots & The Maytals, Gov't Mule, Josh Kelley, Junior Brown, Kim Richey, Branford Marsalis, Paul Cebar & The Milwaukeeans, Buckwheat Zydeco, Walter Trout, Karl Denson, Taj Mahal, Galactic, Robert Cray and many more. They tour constantly and have played most of the premier blues and roots festivals (King Biscuit, Montreal Jazz Fest, Kansas City Jazz & Blues Fest, Monterey Bay Blues Fest, Kerrville Folk Festival...), while headlining clubs night after night across the US and into Canada, Europe and Australia. Though they were also presented in Hong Kong by the House of Blues and in Venezuela by the U.S. Embassy, and were part of an all-star tribute to Muddy Waters at The Kennedy Center for a televised special for PBS and NHK/Japan. This year they played the huge Bumbershoot Festival in Seattle featuring diverse bands like Nickleback, Nas, The Pixies and Koko Taylor. They also played the Telluride Blues & Brews Festival, an event that includes B.B. King, Gov't Mule and Greg Allman.

Not bad for a former cab driver.

"GOOD-BYE MR. PRESIDENT (TIME FOR YOU TO GO)

Memphis In The Morning

Spend Some Time With Me