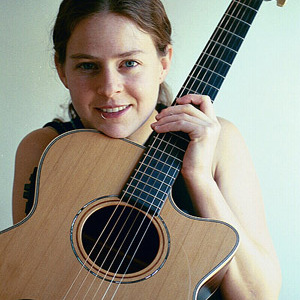 Allette Brooks is a passionate and articulate singer-songwriter, from California, United States, committed to working towards healing on individual, community and global levels. Allette made her debut in 1996 and is currently working on her fourth album Blaze due for release in the summer of 2008. She is a dedicated yoga practitioner, teaching yoga at home and on the road. Allette's forthcoming album Blaze will feature her polar bear manifesto Lost The Shore...

Allette's forthcoming album Blaze will feature her polar bear manifesto Lost The Shore, Lofoka (the scent of rain in the Southern African language Setswana), longtime operatic yodeling favorite Soprano Angst and Babel, exploring religion and spirituality in our fiery and volatile world. The album features the ensemble work of drummer Paulo Baldi of Cake and the Les Claypool and his Fancy Band, bassist Mark Calderone, and pianist Leo Chern.

Allette has released three self-produced CDs and toured nationwide. She's a classically trained vocalist now singing acoustic folk. She didn't pick up her instrument of choice, a guitar, until she was studying ecology in Botswana as a college junior. She played until her fingers bled (this actually happened!) and then jumped into national touring four years later, playing over a hundred shows each year and winning fans from Astoria, OR, to Brunswick, ME.


In 2004, Allette took a hiatus from touring to pursue her longtime vision of studying music about HIV/AIDS in Botswana. In May 2006, Allette completed her MA in African Studies at Yale University with a thesis titled, "Music and HIV/AIDS in Botswana: Rearticulating Relationships Through Song."

Allette released her latest album, Swim With Me in November 2001, and continued to tour extensively including stops at the National Women's Music Festival, the Tucson folk Festival, and the Emerging Artists Showcase at the Falcon Ridge Folk Festival. Known after the title of her second album, as the Silicon Valley Rebel, Allette was interviewed as part of a BBC syndicated radio documentary about the development of Silicon Valley. Her songs Rolling Blackout and Driving were featured in the musical accompaniment to the program. Allette's deep connection with the earth is evidenced in her songs, as comments on ecological issues mingle with colorful imageries of the natural world. Recognizing this, Whole Earth Magazine recently included Allette in their feature on Eco-folk music. As part of her Swim With Me tour, Allette opened several shows for Al Stewart and entertained audiences across the country at venues ranging from house concerts to Club Passim and the Freight and Salvage.

Allette's deft touch and razor sharp wit leaves listeners laughing at themselves and our species, while marveling at her skill on the strings. A student of human biology, she recognizes the complexity of environmental/social issues. She focuses on raising awareness rather than preaching solutions. Although, she says, "Being a folk artist, as opposed to being a mainstream pop artist, is inherently political. It's a choice to relate to people on a different level, to be really honest, to be open-hearted, and to be yourself." Her audiences respond with delight to that honesty, as well as her strong stage presence, intelligence, sarcastic wit and clear love of her art and theater. In an average show, audience members vote, sing, and take a quiz or two.

Some highlights from her latest release include: Rolling Blackout, a social and ecological commentary about Americans' excessive use of energy; Same Room, which gives voice to the fear and isolation of a child immigrant; an ode to the magnificence of Midwestern fireflies; Ice Age, the geologist breakup song; and a piece written in the Okavango Delta in Botswana that has been an interactive hit with live audiences.

The title track of her second disk, Silicon Valley Rebel paints a sketch of a feminist friend who bikes her environmental, gender and economic viewpoints to the corporate cubicle where she is a diva web page designer.

Her first album, Privilege, was inspired by experiences in Africa and at Stanford, where her exposure to environmental problems and gender, race and economic inequities mobilized and energized her poetry.

Allette has produced her own CDs, choosing the artistic integrity and freedom over security -- and giving herself the time to get each track just right. Her music is available from CDbaby.com, folkweb.com, iTunes, and many major online retailers.