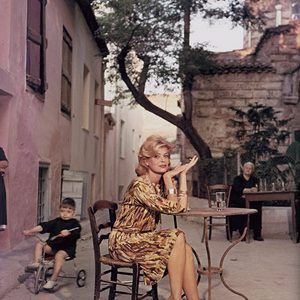 ?????? ???????? {Melina Mercouri} (1920-1994) was an Academy Award-nominated Greek actress, singer, and political activist. She was a member of the Hellenic Parliament, and in 1981 she became the first female Minister for Culture in Greece. She was born Maria Amalia Mercouri in Athens on 18th October 1920. The most important person in her early life was her grandfather Spyros Merkouris, who was mayor of Athens for many decades. Her father was a member of Parliament. The marriage of her parents ended when she was a youngster and she lived with her mother.

She was born Maria Amalia Mercouri in Athens on 18th October 1920. The most important person in her early life was her grandfather Spyros Merkouris, who was mayor of Athens for many decades. Her father was a member of Parliament. The marriage of her parents ended when she was a youngster and she lived with her mother. Her uncle was George S. Mercouris, the leader of the Greek National Socialist Party who became Chairman of the Bank of Greece during the Axis Occupation of Greece during WWII (1941-1944). Her first lover was actor George Papas, but she married Panagis Harokopos, a wealthy landowner. They married during the Second World War and her husband's wealth helped them survive the harsh times of Nazi occupation.

Her first film, the Greek language film Stella (1955), was directed by Michael Cacoyannis, the director of Zorba the Greek. It brought her to Cannes, where it was nominated for the Golden Palm. It did not win the prize, but she met there the man of her life, director Jules Dassin. Dassin and Mercouri lived together for the rest of her life. They had no children. Melina became well-known to international audiences when she starred in the 1960 film Never on Sunday, directed by Jules Dassin. (The couple collaborated on its 1967 musical stage adaptation, Illya Darling, for which she received a Tony Award nomination, as well.) Nominated for an Academy Award for Never on Sunday, she went on to star in such films as Phaedra (1962), Topkapi (1964), and Gaily, Gaily (1969). Mercouri retired from film acting in 1978. Her last film, A Dream of Passion, was directed, as were most of her films, by her husband Jules Dassin. Her co-star in the film was Ellen Burstyn. In 1980, she starred in the Greek production of Sweet Bird of Youth by Tennessee Williams, in the lead role, which had been first played on Broadway by Geraldine Page.

One of her first songs was by Manos Hadjidakis and Nikos Gatsos. It was titled Hartino to Fengaraki and was a part of the Greek production of A Streetcar Named Desire in 1949, in which she starred as Blanche DuBois. The first official recording of this, now-legendary song was made by Nana Mouskouri in 1960, although the company Sirius, created by Manos Hadjidakis, issued in 2004 a recording that Melina made for French TV during the 1960s. Her recordings 'Athene ma Ville' and 'Melinaki' were popular in France. Her recording of 'Feggari mou, Agapi mou (Phaedra)' was quite popular and was later covered by Haris Alexiou.

During the period of U.S.-backed military dictatorship in Greece (see Greek military junta of 1967-1974) from 1967 to 1974, Mercouri lived in France. When the dictatorship revoked her Greek citizenship, she said, "I was born a Greek and I will die a Greek. Mr. Pattakos was born a fascist and he will die a fascist." During those years she recorded four records in France, one with Greek lyrics and the other three with French lyrics, all created by Greek musicians. They were highly popular, and since being remastered and reissued, are still critically acclaimed. Her husky and unusual voice made her the perfect performer of some great Greek songs which are known classics and performed by hundreds of singers. When democracy returned to her home country, she returned, and became first a member of Parliament for PASOK. She later became the first female Minister of Culture in Greece in 1981, and served in that position for two terms until 1989. She took this office again in 1993, and served until 1994. In 1971, she wrote her autobiography, I Was Born Greek. As Minister of Culture, she proposed the Cultural Capital of Europe ideal within the framework of cultural policy of the European Community. Athens inaugurated this institution in 1985. She advocated the return of the Parthenon Marbles, now a part of the British Museum collection, that Lord Elgin removed from the Acropolis. In anticipation of the return of the marbles, a new museum has been created under the Parthenon to host the collection and other pieces from the monument that are being removed and restored.

Melina Mercouri died of lung cancer in a New York hospital on 6th March 1994; she was seventy-three. She was survived by her husband, Dassin. Her body was returned to Athens, where she received a state funeral at the Proto Nekrotafeio ( First Cemetery), equivalent to that of a Prime Minister. Thousands of people attended the funeral.