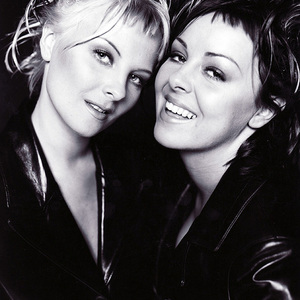 Me & My consists of two sisters from Kolding (Denmark), Susanne Georgi (27 July 1976) & Pernille Georgi (24 July 1974). Before Susanne & Pernille were known as Me & My, they were already a duo called Super Sisters formed from their first names. They released two albums of Danish songs, Super Sisters from 1989, and the second Marieh&oslash;nen in 1990. They also tried running for the Eurovision Song Contest in 1991, but because the rules stated that no children could participate, they couldn't.

Their first international hit was Dub-I-Dub in 1995. From their debut album Me & My, of the same year, also comes the hits Baby Boy and Lion Eddie.
Their second album Let the Love Go on from 1997 and third album Fly High from 2001 could not reach the success of the first album. Fly High features a cover version of D-A-D's Sleeping My Day Away in a dance version. There was a lot of reactions from the D-A-D-fans in Denmark as they had a hard time accepting the pop version of the rock song.
They also collaborated with other Danish artists on a single Selv En Dr&aring;be for charity in Denmark. In 2002 Me & My and the danish female-artist Nicole recorded a latino/dance-track Te Quiero.
In 2007, they tried again to go to the Eurovision Song Contest. They competed in the Danish national final with the song Two Are Stronger Than One. They became 6th out of 10 participants.
In 2009, Susanne finally fulfilled her dream to participate in the Eurovision Song Contest, but without her sister. She will represent Andorra with the song La teva decisi&oacute;.

Let The Love Go On