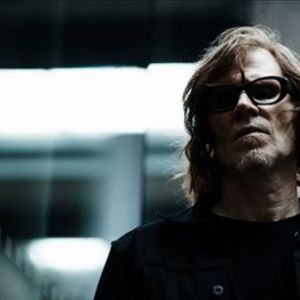 Mark Lanegan (born November 25, 1964) is an American rock musician and songwriter. Lanegan began his music career in the 1980s, forming the grunge group Screaming Trees with Gary Lee Conner, Van Conner and Mark Pickerel. During his time in the band Lanegan would start a low-key solo career. Besides Screaming Trees, Lanegan also found moderate success and good recognition from his solo projects and also joining, for a time, hard rock band Queens of the Stone Age giving contributions on the critically and commercially successful albums Rated R, Songs for the Deaf and Lullabies to Paralyze.

The Screaming Trees eventually disbanded in 2000 and although Lanegan became a permanent member of Queens of the Stone Age for a period he continued to collaborate on tracks with other artists such as Melissa Auf der Maur, Martina Topley Bird, Creature with the Atom Brain and recently on Black River by the electronic outfit, Bomb the Bass. Since leaving the Queens of the Stone Age in 2005, Lanegan has worked with fellow Gutter Twin Greg Dulli's Twilight Singers as well as collaborating with Soulsavers and former Belle and Sebastian singer and cellist Isobel Campbell (on three albums). His latest solo studio release was Bubblegum released in 2004. He served as co-lead singer of the alternative rock band The Gutter Twins along with Greg Dulli, a collaboration which began in 2003 and released their debut Saturnalia on Sub Pop in March 2008.

I'll Take Care Of You

Whiskey For The Holy Ghost