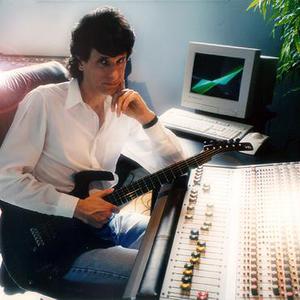 For almost twenty years, Mark Dwane has been an internationally acclaimed composer and musician. Born July 30, 1954 in Cleveland, Ohio, Mark began formal lessons on the guitar at the age of 10. Influenced early on by the music of the era, Mark continued his musical education and gained experience playing with many bands. Able to fluently read and write music, Mark continued to study music theory and composition with a wide variety of instructors. In the 70's Mark began experimenting with guitar synthesizers, pioneering a unique fusion of electronic artistry and innovative composition .

During this time, his band ?ORB? performed throughout the northeast Ohio area and recorded an album entitled ?Such Power Exists??. In 1981 Mark decided to pursue a solo career and build his own studio. Teaching guitar for his livelihood with over 50 students a week, Mark now had the creative freedom to produce his music without constraints. Although involved in numerous projects, ?The Myth? was his first un-official release from that period. A collection of essentially demo tracks loosely based around an archeological theme. The advent of affordable digital recording technology and a polyphonic MIDI guitar system brought about a paradigm shift for Mark in 1987. Inspired by Richard Hoagland's book ?The Monuments Of Mars?, he created a soundtrack to the enigmatic anomalies of the Cydonia region.
'The Monuments Of Mars - The Music?(1988), was heralded as a definitive statement of his sound and style. Each successive release, ?Angels, Aliens & Archetypes? (1991), ?The Atlantis Factor? (1993), and ?Paradigm Shift? (1995), were critically acclaimed and garnered the highest reviews. A brief sampling of the following accolades are testimonials to his accomplishments?

"Mark Dwane has established himself as one of the hottest and most prolific artists currently in the electronic-space music genre.? Houston West

?Dwane represents one of the best MIDI guitar composers and performers I have had the treat to discover. ? John Patterson / All Music Guide

?Cinematic music that paints the sky in electronic colors. Dwane is creating truly modern music, born of technology and draped around imagery of possible futures and past mythologies. After listening to Mark Dwane's compositions, you feel like you've really been somewhere." John Diliberto / ECHOES


Mark was continually upgrading his studio to state of the art specification and developing his production skills in the process. It was at this time that Mark began to employ his talents at production music. Working with companies in New York and Los Angeles, Mark's music has been used on National and International network / cable TV and film including: CBS, TBS, The E Channel (E!), ABC, The Playboy Channel, The Weather Channel, Lifetime, MTV, Univision, Fidelity Investments, Singapore Airlines, Sony, The NBA, The Canadian Winter Games, FOX Sunday, FOX Sports, Comcast Sports and the list continues to grow?

A native of ?The Rock And Roll Hall Of Fame? city, Mark enjoyed the notoriety of being selected as one of Cleveland Magazines most interesting people for 1996! In 1998 Mark released ?The Nefilim? a mysteriously luxurious sounding limited edition CD. 2000 and 2001 saw the release of ?Archives? and ?Planetary Mysteries? respectively.

The former was a collection of previously unreleased tracks, while the latter was his first collaboration with vocalist Michelle Nader. As all of Mark's previous work had been strictly MIDI guitar, ?Planetary Mysteries? also featured the introduction of electro-acoustic guitars, widening the aperture of his considerable guitar playing abilities. This trend continued and intensified on ?The Sirius Link?, which was chosen as one of top 10 Essential ECHOES CD's for 2004!

Spring of 2007 saw the release of Mark's latest endeavor entitled ?2012?, which went straight to #1 on ECHOES and was awarded CD of the month for April. As of this writing, ?Variants? has just been released! A newly re-mastered, audiophile collection of alternate versions and alternate mixes from Mark's existing catalog.

Intellectually stimulating and emotionally powerful, Mark's music has always been a direct conduit to his soul. Visionary, futuristic, highly melodic, romantic, otherworldly, mysteriously optimistic, are all descriptive adjectives of the music that Mark Dwane has created.

He presently resides in Westlake, Ohio with his wife Deborah and their four Siamese cats. An avid aviation enthusiast, he also enjoys cycling, hiking, science fiction and a good sauvignon blanc.