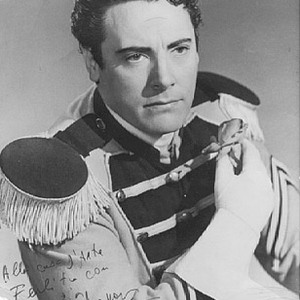 Mario del Monaco (Florence July 27, 1915 - October 16, 1982 in Mestre) was an Italian tenor and is regarded as one of the loudest tenors of the 20th Century. Mario was born to a musical upper-class Florentine family. As a young boy he studied the violin but had a passion for singing. He graduated from the Rossini Conservatory at Pesaro, where he first met and sang with Renata Tebaldi. Maestro Raffaelli recognized his talent and helped start his career. He married Rina Filippini in 1941.

His main career began with his debut on December 31, 1940, as Pinkerton at the Puccini Theater in Milan. and he retired in 1975. He was famous for his role of Verdi's Otello which he first tackled in 1950 and kept refining through his career. It is said that he performed this opera a remarkable 427 times. However the book published by Elisabetta Romagnolo: Mario Del Monaco, Monumentum aere perennius, Azzali 2002 lists only 218 appearances as Otello. He was buried in his Otello costume. He was partnered with Tebaldi in a long series of Verdi and Puccini operas recorded for Decca.

He was handsome and powerful, a natural actor with perfect idiomatic phrasing and a ringing voice, the "Brass Bull of Milan."