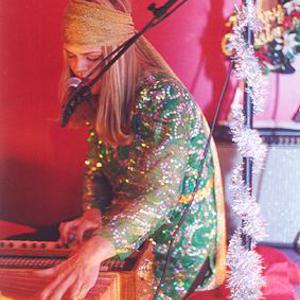 Marianne (pronounced Mah-ri-ah-na) Wilhelmine Nowottny created some of the boldest and bizarre music of her generation; her deep, voluptuous voice and torchy, cabaret-style songwriting were separated by an unbridgeable gap from the MTV-purveyed, homogenized strip-mall music that the majority of her peers devoured. In the eighth grade, Nowottny, who busied herself writing poetry, met a like-minded and classically trained pianist named Donna Bailey.

The two soon began collaborating musically under the name Shell, experimenting with a cassette recorder and a Radio Shack keyboard in their bedrooms, committing hours of utterly strange psychedelic music to tape. Nowottny moved to the northern New Jersey town of Sparta in 1998 to be with her father; it was there that she bought a piece of musical equipment that would help define her sound as a solo artist -- the Concertmate 990 keyboard. Early on, her mother had taught her the basics of the piano. Now inspired to make her own music in Bailey's absence, Nowottny began picking out, by ear, the keyboard parts of Shell songs, and eventually moved on to incorporate eastern modes and pentatonic scales into her playing. Nowottny and Bailey would still play together when they could, but living on the opposite ends of the state gave Nowottny ample time to write and record her own compositions. Later that year, the 16-year-old would have a fortuitous chance meeting with playwright Lori Bortz and her husband Mark Dagley on the streets of Newton, NJ. Immediately forming a friendship with the couple, Nowottny shared some of her poetry and eventually played the Shell tapes for them. Intrigued and impressed, they agreed to make a cassette-only edition (limited to 150 copies) of a project called Shell vs. Neu! the first release on their fledgling Abaton Book Company imprint. Dagley created the tape, which has since been called a "post-modern battle of the bands," by mixing elements of Shell songs into a Neu! album. Immediately after the Shell cassette, Abaton released Nowottny's debut solo recording Afraid of Me in a similarly limited CDR edition. When the seven-song recording, along with Nowottny's sporadic and mystifying concerts, began generating excitement in the Manhattan art and underground scenes, the label/publishing house released an expanded, proper version of the album. They also published a book of her poetry and released numerous videotapes of her gigs, as well as peddling a bevy of unconventional Nowottny-related material from their website. The prodigious young performer graduated from Sparta High School in 2001 at the age of 18, and proceeded to release the wildly ambitious but accomplished double album Manmade Girl -- Songs and Instrumentals to a smattering of underground praise. After performing in support of the record in New York and New Jersey throughout that summer, she traveled to the West Coast for the first time to give a Halloween concert in Cupertino, CA.

What Is She Doing?

Jesus In A Jiffy

Strange Weather From The Basement

Illusions Of The Sun