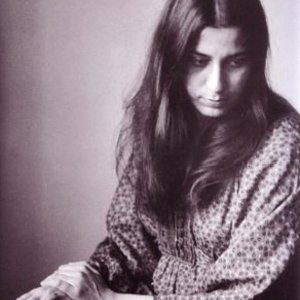 Maria Farantouri (Greek: ????? ??????????), born in Athens on 28 November 1947 is a Greek singer. She has collaborated with prominent Greek music composers such as Mikis Theodorakis (&Mu;?&kappa;&eta;&sigmaf; &Theta;&epsilon;&omicron;&delta;&omega;&rho;?&kappa;&eta;&sigmaf;), who wrote the score for Pablo Neruda's Canto General, which Farantouri performed. During the military junta which ruled Greece until 1975 she colloborated with Mikis Theodorakis by recording protest songs in Europe.

During the military junta which ruled Greece until 1975 she colloborated with Mikis Theodorakis by recording protest songs in Europe. She has recorded songs in Spanish ('Hasta Siempre Comandante Che Guevara'), Italian, and English ("Joe Hill" and Brecht's "Alabama Song" from The Threepenny Opera), as well as works by Greek composers Eleni Karaindrou (&Epsilon;&lambda;?&nu;&eta; &Kappa;&alpha;&rho;&alpha;?&nu;&delta;&rho;&omicron;&upsilon;) and also Mikalis Bourboulis (??????? ????????????) ('San Elektra' and 'Tora Xero') in which she realized a special fusion of vocal and instrumental beauty with musical accompaniment by Vangelis. She also sang the notable 'Mauthausen Cycle'. She was an elected member of Greek Parliament for a few years.

Her voice is a particularly tender, deep contralto with about an octave and a half of silky smooth range.

Maria Farandouri was born in Athens ?n November 28th, 1947, a harsh period, when Greece, like much of Europe, was recovering from the devastation of World War II and the German Occupation. However, it was also a period of readjustment and awakening, sentiments expressed by Aggelos Sikelianos in his poem March of the Spirit, a work of exaltation and heroic vision that would be sung by Maria Farandouri 23 years later in a setting by Mikis Theodorakis.

Maria's childhood was full of hardships. Her parents were both islanders, her father from Kefalonia, and her mother from Kythira. By the time she was born they were living in the working-class suburb of Nea Ionia, an area that had been settled by refugees from Asia Minor in the 1920's. One of the many children struck by the poliomyelitis epidemic that swept the world, she was separated, at two years old, from her parents and quarantined with other affected children in a sanatorium. This painful experience and the effects of the disease made her childhood years difficult.

It was while she was singing with the Society choir, in 1963 that Mikis Theodorakis first heard Maria singing a song of his own entitled Grief. The composer was deeply impressed by the young singer and at the end of the concert he met her backstage: ?Do you know that you were born to sing my songs?? he told her. ?I know? was the immediate response of the sixteen-year old singer. In the summer of the same year, after school had broken up for the summer vacation, Maria became a member of Theodorakis's ensemble. Together with Grigoris Bithikotsis (&Gamma;&rho;&eta;&gamma;?&rho;&eta;&sigmaf; &Mu;&pi;&iota;&theta;&iota;&kappa;?&tau;&sigma;&eta;&sigmaf;), Dora Yiannakopoulou and Soula Birbili, Maria encountered the magic of concert performance for the first time. Soon, her voice was heard at all important political and social events. Theodorakis's new work The Hostage was performed at every peace demonstration, and with her militant young voice, Maria made the song The Laughing Boy known throughout Greece, and eventually, the world.

During the same period, two of the most famous actors of the Greek theater (Katina Paxinou and Alexis Minotis) were preparing a performance of Euripides' Phoenician Women at Epidaurus for which Theodorakis had composed the music. Observing the rehearsals was an education in vocal practice and musical expression for the young Farandouri.