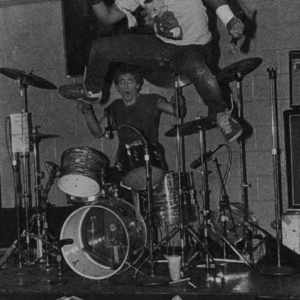 Marginal Man was a hardcore punk band that emerged in the Washington, D.C. hardcore scene in 1983. Some members of Marginal Man played earlier in Artificial Peace, a band which appears on Dischord Records' important Flex Your Head compilation, an essential document of the 1980's D.C. punk scene. They played for five years before a final performance at the 9:30 Club in 1988. Members of the band included: - Steve Polcari - Vocals - Pete Murray - Guitar, Vocals - Kenny Inouye - Guitar - Andre Lee - Bass

They released one EP, Identity (Dischord 13), an LP in 1984 called Double Image (Gasatanka/Enigma) and appeared on the compilations, State of the Union and 20 Years of Dischord (Dischord 125).

Marginal Man were known for energetic live performances, with long haired lead singer Polcari leaping into the air, displaying a more "rock" style than many bands in D.C. They were also a precursor to today's "emo" scene, with shows interrupted on occasion by a grief stricken Pete Murray who could break down with thoughts of a friend who'd committed suicide. Unlike the lower class punks of the U.K, or blue collar roots elsewhere, many D.C bands like Marginal Man had family links to solid middle & upper class establishment instituitions, their shows were attended on occasion by guitarist Inouye's father for example, a prominent Senator from Hawaii. Although Marginal Man and many other bands of this era were neither as commercially sucessful, long-lived nor as memorable as such bands as Minor Threat, such lesser-known bands are considered by some to be more representative of the energy, spontaneity, and communal feeling of the time.