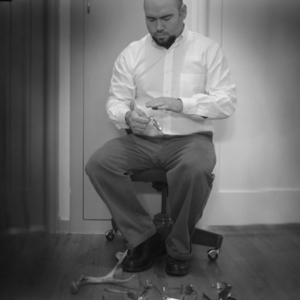 Marc Manning is a artist and musician living and working in San Francisco. Inspired by the forests of the pacific northwest and the ghost folklore of the north east, Manning uses the wail of his electric guitar to ward off unseen forces that seem to be conspiring against him. He has released music under the monikers, legend of boggy creek, everything is fine, red weather tigers, and heavy lids. He has performed extensively on the east and west coasts over the past 10 years.

Manning is a veteran of several Philadelphia atmospheric bands, the shoe gazer art rock of "the legend of boggy creek" and cave core rock of "everything is fine"

Air In The Trees