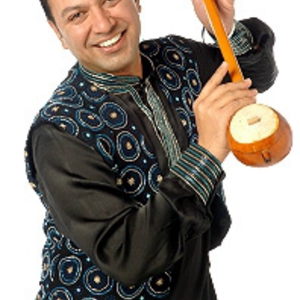 Manmohan Waris is one of the three young legendary brothers in the world of Punjabi music, and he is the eldest. The other two brothers are Kamal Heer, with classical music training and the gift to lure live audiences, and the third brother is music writer and director - Sangtar. Manmohan Waris is one of the top Punjabi singers in the world. He has been around for almost 12 years now. Since he released his first album "Gairan Naal Peenghan Jhootdeye' in 1993, he has never looked back. Punjabis around the world love him and he feels the pressure of not letting them down.

His humbleness and sincerity has won many hearts. His voice is considered one of the sweetest around and his songs attest to his passion for clean and literary lyrics. So far Waris has released 17 albums which are:

He was born into a farming family in the Village of Halluwal, Punjab. He had a great interest in music since an early age. He started his formal music training at the age of 11. Everything he learned from his Guru, he taught his younger brothers. So all three brothers got seriously involved in music at a very early age.

He got his music degree from Punjab University. But the most influential music Guru he had was Shree Jaswant Singh Bhanwra. Unlike many other Punjabi singers who also learned music from Shree Jaswant Singh Bhnawra, the Guru did not teach him so called "Lok-Gaayiki", he insisted on teaching him the real music he knew himself. He saw a great singer in Manmohan and he wanted him to shine.

In 1990, Manmohan Waris's family moved to Canada. Here he made his first album 'Gairan Naal Peenghan Jhootdeye.' The album was a great success and when Waris returned to Punjab, Punjabi's everywhere just couldn't get enough of him. So he decided to move back to India.

His career has never seen a foggy day since that time. Waris' philosophy about his name and fame may have something to do with that. In his opinion "keeping your name on the top is not an easy thing, you have to work hard to get here, and you have to work harder to stay here".

Manmohan got married in 1996 and in 1997 he and his wife Pritpal had their first baby. It was a boy and they named him 'Amar' after the great Punjabi Dhadi singer 'Amar Singh Shaunki. Manmohan's in-laws are also from the same village as the late Dhadi. Waris has recorded a few of Dhadi Amar Singh Shaunki's songs as a tribute to him. These songs are:

Manmohan's latest religious release, named ?Tasveer? contains 9 very touching and thoughtful songs. In 2001 Manmohan and his wife had their second child, a girl named 'Saiya'. Manmohan spends most of the year in Punjab and he tours the west in the summer.

Manmohan's songs are evergreen songs. People remember his earliest work same way as they do his latest. Manmohan's latest Punjabi Album is titled "Nachiye Majajne". The album is on Plasma Records/Kiss records and got a great response from Punjabis everywhere. The title song "Aja Appan Nachiye Majajne" with its Desi music and Dhole rhythms is a milestone on the future path of Punjabi music. Also the success of 'Punjabi Virsa.' another song from this album proves that there is still room for literary and meaningful poetry in the fast paced, single based commercial Punjabi music world.

Waris has always worked hard to put his efforts where his heart is. He is always eager to point out anything that gets his attention. He has never sung a song to gain mere a commercial success. But this is not his greatness, his greatness is that he doesn't do it to serve his language or his native land, he just does it because he is that kind of person and it is his nature.

We hope that Waris will continue to give us thoughtful and yet entertaining music for many years to come and may God help him to live his dreams.
Swaran Shergill @ punjaab.com