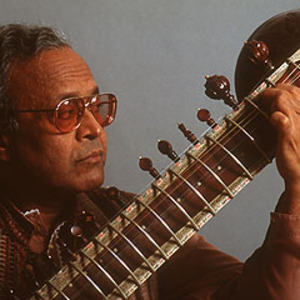 Manilal Nag - born in the Bankura District of West Bengal - is recognized in serious music circles as one of the most talented and serious exponents of classical sitar. He comes from a family of musicians who have evolved the Vishnupur Gharana, a style of music that originated nearly 300 years ago. His grandfather, Govinda Nag, and his great-great-grandfather, Bauridas Nag, were both distinguished sitarists in their times.

At the age of four, Manilal was initiated in the art of sitar playing by his father, the famous sitar master Sangeetacharya Gokul Nag. After 10 years of strict musical studies and practice, Manilal made his stage debut in the All-India Music Conference, accompanied by Pandit Shanta Prasad on tabla. Since then he has become one of the most popular and sought-after concert sitarists, performing regularly in music conferences held throughout India.

Manilal's style retains the depth, resonance and sensitivity of the Dhrupad Ang in the alap, followed by an extensive range of taans, gamaks and tihais in the jor, and the use of subtle and lilting phrasing in the jhala. Through this combination, he brings to perfection the delicacy and sentiment of every raga. He is a master of improvisation and possesses the rare ability to breathe life and originality into a classical theme, thereby molding it into a living and captivating form.

Manilal has also had the unique opportunity of maintaining close proximity to such great musicians as Zia Mohiuddin Dagar, Majid Khan, Amir Khan, Kanthe Maharaj, Ahmedjan Thirakwa, and many others with an open mind and heart.

Since 1953 he has performed many times on the National Program of Music broadcast by All-India Radio, where he is categorized as a 'top grade artiste,' and has appeared on several External Services television specials. In 1973, he was sponsored by the Ministry of Education to visit the United Kingdom and the Continent in a cultural program arranged by Sanskriti of London. He has also performed in the USA, Canada, Australia, Japan, Fiji, Nepal and Bangladesh.

Anand Gopal Bandopadhyay is also from a family of musicians of the Vishnupur Gharana of West Bengal. Receiving his initial training from his father, he became the disciple of Pandit Mahadeo Prasad Mishra of the Benares Gharana.

Vishnupur Gharana
by Manilal Nag
Gharana, as the word suggests, is a school of thought or a particular system or a style in music. Presentation of the same raga with stylistic variations led to the origin of these gharanas or schools of music. These gharanas formed the nucleus of demonstrative art. The glorious heritage of Hindustani music, as we find it to this day, has been preserved by great musicians of the past who have handed down their rich resources in the classic tradition of guru-shishya parampara, maintaining in each case the individual trends of their gharanas.

The Vishnupur Gharana of Bengal has a prestigious past, the history of which has little been revealed. Vishnupur, the town of Lord Vishnu, is at present a subdivision town of Bankura district in West Bengal. The historic name of the Rarh region of West Bengal is Mallabhum. Though not vast in area, the region holds a significant position in matters such as political vigour, civilization and culture. Historians suggest that Mallabhum had once been the cultural centre of Eastern India. Among its cultural achievements, music had the highest honour. Here I am to discuss some features of the Vishnupur Gharana, along with a few major historical references, that have left indelible impressions upon the music of Bengal.

In the later part of the eighteenth century and towards the early and mid-nineteenth century, when music of different gharanas were gradually having their assimilation in the city-centre of Calcutta, the dhrupad style flourished among the musicians of Vishnupur. To recapitulate history, the Maharaja of Vishnupur was a contemporary of Emperor Aurangzeb. The Senia Gharana was then in full bloom and its reputation spread throughout India. Its influence on the music of Vishnupur was enormous. It was around this time that the famous dhrupad singer Bahadur Khan of the Senia Gharana, descendant of Tansen, came at Vishnupur and made his gharana popular. The next Maharaja of Vishnupur, Raghunath Singh Deo II, steered his attention towards popularizing Bahadur Khan. At this time, the Ustad expressed his desire to settle down in Vishnupur and the Maharaja made all arrangements to honour him as his court singer. The Maharaja also announced that anyone having a sweet voice and interested in music could learn from Bahadur Khan without any fees. He also bore the financial liability for the poor students. In time, a good number of students became the disciples of Bahadur Khan.