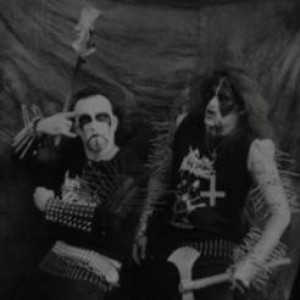 Maniac Butcher are one of the Czech Republic's foremost and notorious Black Metal acts. As their name implies Maniac Butcher deal in raw and unadulterated Metal with no concessions keyboards or female vocals. Indeed, the band state quite candidly ?We use the mouths of girls for totally different activities'! Although the band first emerged with the 1993 demo ?Immortal Death' Maniac Butcher can trace their history as far back as 1988. The debuting line up comprised of vocalist Barbarud Hrom, guitarist Vlad Blasphemer, bassist Thomas and drummer Michael.

Although the band first emerged with the 1993 demo ?Immortal Death' Maniac Butcher can trace their history as far back as 1988. The debuting line up comprised of vocalist Barbarud Hrom, guitarist Vlad Blasphemer, bassist Thomas and drummer Michael.

Second album ?Lucan- Antikrist' saw the inclusion of second guitarist Lord Unclean. This outing included a rendition of Master's Hammer's 'Hell Abyss'. Line up troubles afflicted the band further when Michael left the fold, to found yet another uncompromising act Agmen, followed by Lord Unclean. By this stage Maniac Butcher was down to the pairing of Vlad Blasphemer and Barbarud Hrom for the ?Cerna Krev' outing.

1999 had session players Ramus on guitar and Butcher on drums filling the vacant positions for a split album shared with Inferno and Sezarbil. A full length effort ?Invaze', which included a cover version of a track by the same name originally recorded by Assessor, was also released the same year. Meantime the ?Cerna Krev' album was re-released on the Brazilian Mega Therion label with extra tracks and retitled ?Sangue Negro'.

Maniac Butcher achieved quite a coup in 2000 when the esteemed Akhenaten of noted American Black Metal project Judas Iscariot was inducted into the band on bass. However, following European gigs that year the band announced they were to fold. Recordings from these dates would surface posthumously in March of 2003 as the 'Live In Germany' album through the From Beyond Productions label.

Both Blasphemer and Hrom also operate the side band Nhaavah issuing the album ?Kings Of Czech Black Metal' and split a EP with Katharsis. Also in 2003 the Brazilian Mutilation label re-issued 'Barbarians' in limited vinyl formats and combined the two demos ' Immortal Death' and 'The Incapable Carrion' for CD release.

As a member of Detonator 666 Vlad Blasphemer, in the guitar role, released the album 'At The Dawn Of Sadistioc Infernal Holocaust' in April 2004. The Dutch label Displeased Records re-issued 'Live In Open Hell' on vinyl format in December of 2004.

In 2005 released a DVD entitled ' Dead But Live - '92-01' and in 2007 released a EP called 'The Beast / Dva tisice let' which the album cover was pianted by Quorthon of Bathory also it is the first studio album in nearly 7 years.

The Best Of / A Tribute To Maniac Butcher CD2

The Best Of / A Tribute To Maniac Butcher CD1