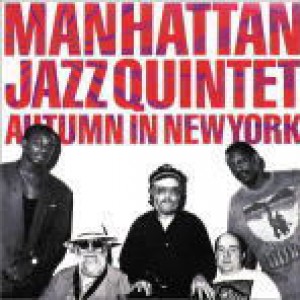 The Manhattan Jazz Quintet is a jazz ensemble consisting of David Matthews on piano, Lew Soloff on trumpet, Victor Lewis on drums, Andy Snitzer on saxophone, and Charnett Moffett on bass. Previously, the band featured George Young on tenor sax, Eddie Gomez on bass, and Steve Gadd on drums. The group was formed in 1983 at the suggestion of Japanese jazz magazine Swing Journal and the King record label and became quite a success in Japan, earning the Gold Disk Award of Swing in 1984.

Gadd left after 1987, with Dave Weckl serving as a replacement in 1988 and '89, but came back for a reunion in 1990, which also featured John Scofield as guest artist on a number of selections. These later recordings were recorded for the Sweet Basil label.
The group got back together to make two recordings in 1995 and has released a record every year since 2000 under the Video Arts Music label. Video Arts also re-released many of the older albums on November 21, 2001, coinciding with the release of the new I Got Rhythm.
Gadd has since left the band, with Victor Lewis becoming his permanent replacement in 1993, as has Young, who has been replaced by Andy Snitzer since 2000. Gomez left the band after the recording of Manteca in 1992 and was permanently replaced by Charnett Moffett.
Due to the group's extremely limited distribution in other countries (all albums are only available as imports from Japan), it is not well-known outside of Japan.