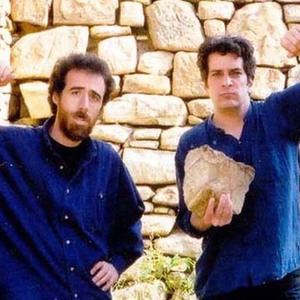 Mandible Chatter was formed in the autumn of 1991 by San Francisco, California, United States area guitarists Neville Harson and Grant Miller. Grant knew immediately that there was something fatalistic about their meeting when Neville idly remarked that he had moved from Pennsylvania to be closer to The Residents. Both musicians had roots in experimental music and their earliest efforts as a newly formed duo took shape as improvised ambient electric guitar pieces not entirely unlike the works of Fripp & Eno.

Both musicians had roots in experimental music and their earliest efforts as a newly formed duo took shape as improvised ambient electric guitar pieces not entirely unlike the works of Fripp & Eno. In retrospect, as strangers to one another they were clearly playing it safe. Over the course of their first year, however, their guard slowly came down and the two began incorporating harsher textures into their music.

Sometime in the spring of 1992, when, as chance would have it, one of the members actually found himself living directly across the street from Church of Satan founder Anton LaVey, the guys decided there was no choice but to open wide the windows and "serenade" their newfound neighbor. No one is certain whether this performance was actually received by the late Mr. LaVey (or if it might have somehow contributed to his death), but the affair was recorded for posterity and saw light of day as Mandible Chatter's first release, a cassette suitably titled Serenade for Anton.

This period also saw the first significant change in Mandible Chatter's approach. Perhaps feeling stifled or just eager for growth the guitars were dropped in favor of less conventional sound sources. Microphones, springs, grinding wheels, baby monitors, and shoes (everything and anything they could find) were all used to make the music which appeared on the band's first full-length release, 1993's lo-fi but charming CD, Drinking Out The Hourglass. Alan Splet would have been proud.

Soon after, the group moved its experimentation to a dank and gadget-filled garage down in lovely East Palo Alto. Its former resident, a mysterious figure named Juergen, had perished while attempting a climb of Yosemite's Half Dome, leaving behind a wonderful assortment of oddities from Pompeiian art prints and diaries in German to jam jars and metal objects indiscernible in origin to this day. A Metal Tree was constructed, fellow musicians invited, and creativity allowed to run riot for the next couple of years.

In 1994, the group released its second CD, Hair Hair Lock & Lore, their dark ambient statement, which in turn caught the attention of Manifold Records in Memphis. Mandible Chatter's first disc for Manifold, Grace, marked a high point for the group. They had found label support at last and their garage endeavors were reaching their peak. Having taken a shine toward a more uplifting sound overall, the band was now producing its most realized material. The guitars had returned and into the mix came cello, vocal drones, and piano, to name but a few. Amorphic ambience was being slowly infused with more thoughtful structure. This merging of ambient-industrial textures with more traditional styles caught the interest of radio and press folk alike, not to mention their fans.

Through 1995 and 1996, Mandible Chatter could be found in assorted venues providing musical accompaniment to San Francisco butoh dance troupe Collapsing Silence. In 1997, they worked simultaneously on soundtrack music for the Marijoh Danztheatre production of Pierre Riviere and their fourth CD, Food For The Moon. This second release on Manifold was a continuation of what the group had begun with Grace, but with a few notable differences. Having left the garage, both for better and for worse, Mandible Chatter was now dividing its time between home recording and a proper recording studio. They had grown tired of making noise for noise's sake and were looking to their earliest influences for guidance. Accessible songs like the band's own "Sad Tree Song" or the Spacemen 3 cover "So Hot" must have come as somewhat of a shock to many of the group's fans, but those with an astute ear had heard it coming.

In the early months of 1998, after a brief hiatus, Mandible Chatter regrouped to plan their next move. With only guitars in hand (much like at their start) they soon found themselves strumming folk tunes. It seemed to make perfect sense that the next record be an amalgam of their earliest musical influences - British pop and folk - with some of the experimental textures they had honed through their years together. In 1999, Measuring the Marigolds was released.

By the time of Marigolds' release, Mandible Chatter had become a bicoastal partnership with Neville relocating, first to Boston and then to Boulder two years later. The band was effectively in hiatus, but kept active by promoting their latest release and conducting interviews. There was never any question about working together on future projects, though the process would need to be different living apart.

For three weeks, starting at Christmas 2001 and continuing into the earliest days of the new year, Neville and Grant reconvened in San Francisco to work on a new ambient-experimental project. Ideas that had been gathering apart for two years were brought together that first week. Then the studio was moved up to Portland for a reunion with longtime MC collaborators from years past. Days and nights were spent improvising and cultivating new sounds. In the summer of 2002, Mandible Chatter worked with Robert Rich to distill and mix twelve new finished pieces for release as the upcoming Mandible Chatter CD.

In twelve years, Mandible Chatter has covered more musical territory than most enduring groups cover in a lifetime. If there were a single attribute that all Mandible Chatter releases could be said to have in common, it would be the ability to surprise the listener. Textures, even genres, are often blended, exploiting contrasts to their fullest, yet always retaining the cohesive thread. Much like navigating Hampton Court's maze by night, with Mandible Chatter one can never be quite sure what lies around the corner.