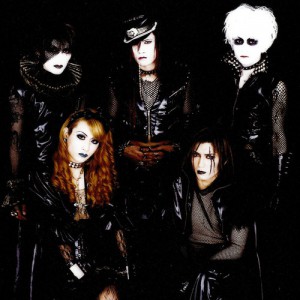 MALICE MIZER was a Japanese visual kei band originally formed in August of 1992 by guitarists Mana and K&ouml;zi, who had previously been in a band together called ??? (Matenrou). After going through three vocalists and three distinctive periods of musical and visual style, the wildly successful group went on "hiatus" December 11th, 2001. MALICE MIZER's first era, the Tetsu era, lasted from 1992 until 1994. Line-up: Tetsu (vocalist), Gaz (drums), Yu?ki (bass), K?zi (guitar), and Mana (guitar).

The GACKT era followed after a one-year hiatus, beginning in 1995 and lasting until 1999. Line-up: Gackt (vocalist), Kami (drums), Yu?ki (bass), K?zi (guitar), and Mana (guitar). This era was considered MALICE MIZER's "major" era, because after Voyage was released, MALICE MIZER signed to major record label Nippon columbia and released merveilles, which is largely considered their best album. After the release of merveilles, Gackt announced his departure from the band, and in June of 1999, Kami died of a subarachnoid hemorrhage. MALICE MIZER was then reverted back into an indies status, on Mana's label Midi:Nette.

The final era featured Klaha , a classically trained opera vocalist. This lasted from 2000 until the eventual hiatus in 2001, from which it is largely believed they will not return, and many consider MALICE MIZER to be disbanded. Line-up: Klaha (vocalist), Yu?ki (bass), K?zi (guitar), and Mana (guitar).

After his departure in early 1999, Gackt started a solo career which has been enormously successful; he is now one of Japan's top entertainers and TV personalities. Klaha started a solo career as well in December 2002; as of 2005 the status of his project is uncertain. Mana has formed his own solo project, Moi dix Mois, and simultaneously pursues a career as fashion designer for his Gothic Lolita fashion label, Moi-m?me-Moiti?. He continues to also run his Indie record label, Midi:Nette, and is looking for bands to sign and produce. K?zi has joined Haruhiko Ash's Goth/Industrial band Eve of Destiny and also has a solo project. After his departure in 1994, Tetsu has subsequently taken part in a series of bands such as Zigzo and Mega 8 Ball; his most recent being the independently released band nil. The whereabouts of Yu~ki were unknown until he briefly resurfaced in 2004 as lyricist for K?zi's solo release "MEMENTO".

In 2010, the band had a brief revival during a Moi Dix Mois and K?zi coupling tour. The line-up for this short revival only consisted of Mana, K?zi, and Yu~ki, with Moi Dix Mois' drummer as a support member. Klaha did not show up to the performance, so K?zi sang while playing guitar. "Beast of Blood" was one of the songs played. Currently Mana is still in Moi Dix Mois, Yu~ki still keeps to himself outside of the visual-kei scene, and K?zi recently joined the new wave band XA-VAT.

In several cases, the Japanese titles are given first, followed by the romaji titles in square brackets.