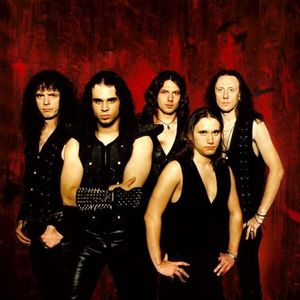 2. There is also an Industrial Doom band out of Finland by the name of Majesty. The band is a one man side project of Marko Hautam?ki, also known as Lord Gravehill in the Gothic Rock band Two Witches

Releases are as follows:

3. Majesty was the name of New York progressive metal band Dream Theater, but the name has been changed before the first album release. However, it has left a trace on Dream Theater history: the logo of the band is the 'M' letter and also there is a song entitled 'Ytse Jam' (not to mention Mike Portnoy's label Ytse Jam productions).

5. Majesty is a young Grime MC from the Blue Borough area of South London. Majesty says that his biggest aim is to be the best and most well known artist in the grime scene. He records his tracks in Stardom studios which is his local indepent studio for artists that want high quality recordings for low prices. He has appeared on radio stations such as Manic FM, Axe FM and many more. Majesty is also part of the upcoming Levels Crew based of three other MCs that live in Majesty's area and who he has also grown up with very closely.
Majesty has released two mixtapes from the Level Are Rising series which are released as free downloads on his MySpace. He's also released a promo called Unfinished Business that iss also available for download on his MySpace. Majesty also released a free Greatest Hits Mixtape. He is due to release a new mixtape called Crash Bang Vol 1 which is going to be his first mixtape that isn't going to be for free download. Majesty is not to have yet released any singles but has released two Hood Videos and has also hosted many Stardom TV episodes which usually contains the latest gossip and freestyles from MCs in his area.

6. Majesty was a death metal band formed in early 2009 from Georgetown and Burlington, Ontario, Canada. Majesty now have an EP titled Shadows.

MAJESTY formed in early 2009 with a group of friends who had been playing seperate instruments since their youth. They released their debut EP titled Shadows, a three track demo which is available to download for free to the public. The EP was tracked in Guelph, Ontario with Jordan Valeriote at Sundown Studio. After small breaks and interruptions with the bands line up, MAJESTY is now writing their full length album, a year after the formation of the band. Based out of a small area in Georgetown, Ontario, MAJESTY has just begun to play shows in cities such as Toronto along with local shows. The band is also going to have the entire Shadows EP tracked and charted into the game called Rock Band 2, and have the songs downloadable to anybody with the game.

Sons Of A New Millennium