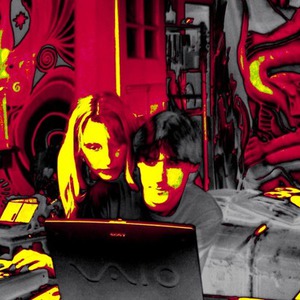 Magnetrixx is Stefan Lewin from Cologne, Germany. The musical development of Stefan Lewin extends over more than 10 years now. He started to play piano for a year when he was nine years old , after that he already started to explore the more electronical ways of music. Since 1995 the project "Magnetrixx" exists and is continously progressing. After several single-releases on Labels such as Tatsu, Midijum or Leviathan, the bigger success came with the realese of their extraordinary debut album "Trittschall" in 2001 on Tatsu-Records.

At this point Magnetrixx proved without a doubt that it is still possible to produce a new sound!
The album featured a very unique style, warm and groovy basslines combined with weird
totally kneaded sounds, which are mostly created by stefan himself, found a lot of friends
all over the place very quickly.
If you try to find words for the Magnetrixx sound, it?s best described as a balance
between seemingly opposite influences: it has the minimalistic driving grooves of techno,
and it remains true to the building structures of trance. It's futuristic tribal and
somewhat mysterious. But above all, it's deeply hypnotic!
The secret of Magnetrixx is how they use the tension of opposing elements to their
advantage, and the end result is always the same: dance-floor inspiration, as listeners are
converted into dancers! On their second album "Phase-Shift", Magnetrixx kept their deeply hypnotic sound
and balanced it with the warmth of the new UK progressive approach that is taking Germany by storm.
The new album "Wired" maintains the original and particular Magnetrixx hypnotic - magnetic - groove,
yet taking it to the next level of humanization and naturalization with brilliant melodies and many musical influences.
From 60's Hippies and 70's Disco, through film music and world music to Technical Electronic Music research and beyond.
It's a new sound: inspiring, positive, grooving, and versatile. equally suitable for speeding
down the autobahn at night, rocking an underground party, or heating up a club dance-floor!
The liveset of Magnetrixx is performed from Stefan and his girlfriend Heike (DJane Morgana),
which have founded the sideproject Morganixx.