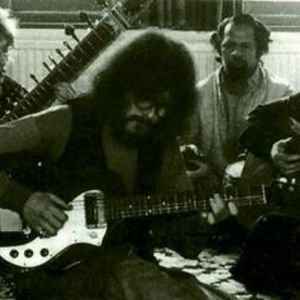 There are two bands with the name MAGIC CARPET. The first band was formed in 1971 and released the album Magic Carpet, with Clem Alford on sitar and Alisha Sufit, vocals and guitar. The band also released an album called ONCE MOOR The other Magic Carpet band is from a much later time and there is no source information available about it. MAGIC CARPET (1972) was an innovative Anglo-Indian so-called psychedelic prog folk fusion band, that started in the early 1970s.

The other Magic Carpet band is from a much later time and there is no source information available about it.

MAGIC CARPET (1972) was an innovative Anglo-Indian so-called psychedelic prog folk fusion band, that started in the early 1970s. Three musical friends, Clem Alford (sitar), Jim Moyes (guitar), and Keshav Sathe (tabla), made one album under name Sargam which was misspelt as Sagram, inappropriately entitled ?Pop Explosion Sitar Style' and released by the Windmill recording company without the band's permission in 1972.

In 1971, the Sargam trio were offered an LP recording contract by Mushroom Records (UK), with the proviso that they find a singer. So Jim Moyes contacted fellow ex-Chelsea School Of Art student Alisha Sufit (voice and guitar), and the eponymous album, Magic Carpet was released early in 1972.

In the 1960s and 70s, both in the UK and in America, there was a burgeoning interest in Indian culture and music, most famously spear-headed by virtuoso sitar player Ravi Shankar and sarod player Ali Akbar Khan, amongst others. Numerous UK bands of the era began to use sitar and Indian musical sounds generally to add a flavor of the east to their recordings. By contrast, Magic Carpet was a more cohesive Anglo-Indian fusion, the Indian instrumentation generating and being integral to the music, not simply an addition. Based around the classically trained sitar virtuoso, Alford, and the ethereal voice of Sufit, Magic Carpet created a distinctive sound described (perhaps misleadingly) as "progressive psych folk" music.

The Magic Carpet album has been described as "a psych folk gem - a unique and extraordinary fusion of east and west, Magic Carpet being one of the very first bands to truly combine Indian and western instrumentation". After a launch at the 100 Club, London, UK, the 'Magic Carpet' band performed at Cleo Laine and Johnny Dankworth's Wavendon, enjoyed airplay on Pete Drummond's Sounds of the Seventies on BBC Radio, plus made several club and festival appearances. However, this novel collective split up shortly after the first album was released. It was only after a lapse of some fifteen years that recognition followed. Widely and more positively reviewed, the original 'Magic Carpet' album has now been reissued on CD and vinyl by the UK Magic Carpet Records label.

Seven of the vocal tracks written by Sufit employ modal tunings in the guitar accompaniment. These 'open' guitar tunings, first introduced and popularized by musicians such as Davey Graham and Joni Mitchell, are supremely compatible with the modal tuning of the sitar, allowing a true integration of sounds. Sufit's vocals feature on nine of the twelve tracks, the remaining three being purely instrumental.

In 1996, Alford and Sufit got together again and collaborated to record the album Once Moor (subtitled Magic Carpet II). It is a true follow-on from the original Magic Carpet album, with its simple acoustic instrumentation - guitar, sitar, tabla, tamboura, and Appalachian dulcimer. The album was issued on CD and heavy-weight vinyl. Around the same time, the album by Clem Alford entitled Mirror Image was reissued, a record first released on vinyl in 1974.