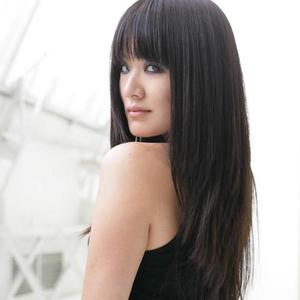 Ms. Kim is very popular among Asian American fans because she is famous for breaking the stereotypes of Asian females?that is, being quiet, passive, demure and submissive.? ?The Segye Times ?Maggie Kim is not shy. In one artful and admittedly racy press photo, the stylish rocker appears in a ?top' composed of carefully arranged electrical tape. But unlike many provocative female musicians, Kim isn't using skin to distract from limited talent.? ? The Washington Post

?Maggie Kim is not shy. In one artful and admittedly racy press photo, the stylish rocker appears in a ?top' composed of carefully arranged electrical tape. But unlike many provocative female musicians, Kim isn't using skin to distract from limited talent.? ? The Washington Post

?I'm never going to live down the electrical tape!? laughs Maggie Kim, about the now-infamous photo that opens her website. ?To me, that photo was artistic and fashion, not pornographic, but I guess it depends on how you choose to look at it.?

Maggie Kim is one of the most provocative, prominent and successful Asian-American independent music artists today. She has carved a unique path for herself as a singer, songwriter, bassist, programmer and producer. Her first demos won the JANE Magazine/Maybelline Reader CD contest and her critically acclaimed first EP, Lesson 1.5, included a collaboration with Grammy Award-winning artist, John Legend.

Though her bold image may cause you to look at her, it's the drive and talent behind the image that will make you look twice. As a singer, songwriter, bassist, programmer and producer, Maggie has received national and international attention, won several awards and has had her music everywhere from MTV's PowerGirls to Michael's Kang's acclaimed film, ?The Motel?.

With her new EP, Rocktease, Maggie worked hard to create a sound that represents the artist she is now. ?It's a lot more ?rawk' than Lesson 1.5, which was a studio project,? explains Maggie. ?But I'd spent about two-and-a-half years playing and touring with a full band and I wanted this record to reflect that. It's more organic, less electronic than the first record. Often, when we played live, people who'd only listened to Lesson 1.5 would be surprised at how ?rock' our live show was. With Rocktease, you get a more complete picture of what I'm really like. You know, the rock chick!?

Indeed, the rock chick pulled in producer and engineer Chris Fudurich, whose resume includes Jimmy Eat World, Nada Surf and Britney Spears, to remix her single, ?Gimme One?. ?It's harder and heavier than anything I've ever done,? says Maggie. ?But it's groovy and really cool. I love it.?

Another first on this record: Maggie did a Korean version of her hit song, ?Obvious/Want You?. ?It was so hard to sing in Korean, my tongue kept getting twisted up!? reveals the Seoul-born artist. ?But I'm really proud of it, especially since my parents gave their stamp of approval. I'd like to do more songs in Korean. It was fun to do and in fact, a lot of non-Koreans like that version of the song better than the original English!?

Her videos for ?Obvious/Want You? and ?Gimme One? have already premiered on MTV K, landing on their Top Ten K Kountdown?ahead of Christina Aguilera and Nelly Furtado. The single ?Gimme One? has been featured on New York radio, alongside The Killers and The Who on Q104.3's ?Out of the Box? program and Maggie has again been chosen as a featured artist on XM Satellite radio with Rocktease.

Aside from making music, Maggie is a successful writer with her own popular dating column. She's also completed a lead role in the feature film, ?Sky?, which will be released sometime in 2007, and is being featured in The Passion America series, debuting in 2007, about groundbreaking Asian-American artists. But music remains her first passion. She's planning on recording a full-length album as well as releasing a remix record of her previous songs in the next year.

?I find nothing else as challenging, frustrating, rewarding, exciting, fulfilling and difficult as music,? says Maggie. ?Well, maybe love relationships!?