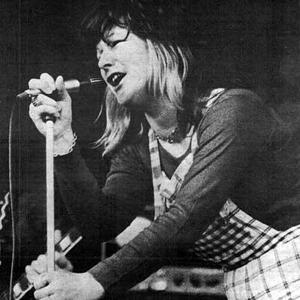 Maggie Bell (born 12 January 1945, in Glasgow, Scotland) is a blues singer who collaborated with many notable musicians including Jimmy Page of Led Zeppelin, on her Suicide Sal album in 1975. Her soulful pipes earned her a reputation as the "British Janis Joplin" and she was a member of the hard rocking live blues rock bands Stone The Crows and Midnight Flyer. Early Career & Recent Update: From a musical family, she sang from her teens, leaving school at the age of fifteen, to work as a window dresser by day and singer at night.

Early Career & Recent Update:
From a musical family, she sang from her teens, leaving school at the age of fifteen, to work as a window dresser by day and singer at night. Alex Harvey, after being impressed with her singing introduced her to his brother Leslie Harvey who was, at that time, a guitarist with the Kinning Park Ramblers. Bell joined the group as as one of the vocalists. After the band split she moved to the Mecca Band at the Sauchiehall Street Locarno, and later to the Dennistoun Palais Band. She then rejoined Harvey, forming a group, initially known as Power, eventually travelling to Germany to sing on U.S. airforce bases in the mid 1960s. Power was later renamed as Stone The Crows. In her words "we worked six nights a week. We worked in Universities and Polytechnics, we were a working band." They were managed by Peter Grant, signed to Polydor, and also toured the US, including a stint on Joe Cocker's Mad Dog's & Englishmen tour and a memorable gig at the Fillmore West with Miles Davis who told Maggie she could "sing her ass off". They continued on with members such as Jimmy McCulloch (later with Wings), bassist James Dewar (later with Robin Trower), and drummer Colin Allen (later with Focus), lasting until 1973, but finding that after her fianc? Harvey's death from accidental electrocution onstage in 1972 it took too much momentum out of the group for them to continue.

Her first solo album Queen of the Night (1973) was recorded in New York with legendary Atlantic record producer, Jerry Wexler. She became the only female artist signed to Led Zeppelin's label Swan Song in the 1970's and was known for her hard rocking road band who played across the US & Europe supporting a diverse who's who of 70's acts including Humble Pie,The Who,Roxy Music, David Bowie, EARTH WIND & FIRE,and Marc Bolan. She later assembled the UK all-star band Midnight Flyer who opened up AC/DC's 1981 world tour and played Live At Montreux in July 1981 where they jammed with Taj Mahal and Albert Collins.

While she never broke big on the charts solo, she had a hit duet in the UK in 1981 with B.A. Robertson on "Hold Me", reaching number 11 in the UK Singles Chart. Her song "No Mean City", written by Mike Moran, is the theme music to the 21st century TV crime drama Taggart. In 2008 shejoined the British Blues Qunitet with Zoot Money and told the Scottish Herald newspaper "I'm my own boss now and the bonus for me is that I'm still alive and singing." .

Crimes Of The Heart

Queen Of The Night