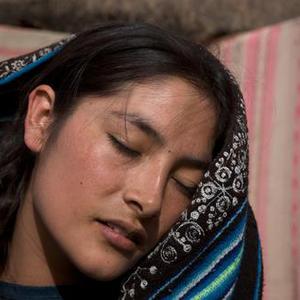 Magaly Solier Romero (born 11 June 1986) is a Peruvian actress, and singer. Born in Huanta, Ayacucho, Peru. Ayacucho was the Peruvian region that during the 1980s and until 1993 suffered the most cruel and sistematic terrorist attacks executed by Shining Path. Those nasty times marked her childhood. While in school as a child Magaly was good in sports, but later in high school Solier discovered her true passion was singing. In 2003 and 2004 she won the 10th and 11th "Seeking New Values" awards at the Ayacucho Song Festival in her hometown.

After finishing school she was discovered by film director Claudia Llosa who was looking for an actress to her first film, "Madeinusa". This film was a success in 2006 and launched Solier's acting career. The second film of Claudia Llosa "The Milk of Sorrow" won the prestigious Golden Bear award at the 2009 Berlinale.
It also won the critic's prize for best movie. On February 2, 2010 it was announced that the film was nominated in the Best International Movie category for the 2010 Academy Awards.
She recently released her first album as a singer, titled "Warmi" in quechua with themes composed by herself. She will next feature in Amador, the last film of Fernando Le?n de Aranoa about immigrants living in Spain.