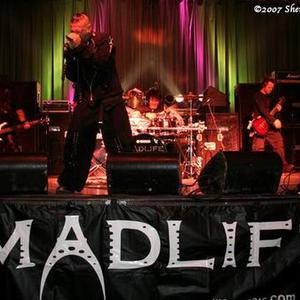 What is Madlife? Madlife: is as harsh as the world we live in. Madlife is what everything else isn't ? cool. There is no whining in this band's audio assault. Inside Madlife's music you'll find powerful vocals, aggressive guitars, and industrial sounding technology. Bands such as Ministry, White Zombie, NIN, KMFDM, and more recently Rammstein and Static X have helped to influence the creations of Madlife.

Madlife has released a 7-song EP that was recorded and produced by the highly respected Stoker (Sting, Ice Cube). Currently Madlife and Stoker are in the studio working to bring you a second CD, and this CD will be even more powerful than the first.

Madlife has already released the song "Angry" as a single, and it's being played on radio stations across the United States. If you thought the songs on the first Madlife CD were hard to get out of your head, wait until you hear what's next. Madlife is also working on putting together a U.S. and European tour for later this year. Until then, Madlife will continue to captivate people with their powerful live shows. Madlife has been able to play with such bands as Adema, Kottonmouth Kings, and Prong.

Precision In The Face Of Chaos

Angry Sonnets For The Soul

Music As Harsh As The World We Live In