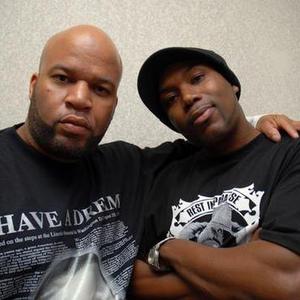 Mac (Eric Gordon) & A.K. (Keith Gordon) are rappers from East Palo Alto, Ca. As artist, Mac & A.K. were signed to Tommy Boy Records in 1995. Throughout the experience with Tommy Boy, Eric & Keith Gordon felt as artists, they did not receive adequate guidance and control over their project. Consequently, Eric & Keith decided to remove Mac & A.K. from the Tommy Boy roster in 1998 to pursue independent freedom.

Westbound (For Riders Only) was the first album released in 1996 under a partnership with Duane Dotson and Street Life Entertainment. E&K Music Group was formed by Eric & Keith Gordon in 2001. The second release and first true E&K Music Group project, was a Mac & A.K. release titled Money Rhyme$, which was released in 2002. This album had appearances by E-40, Above The law, and Mac Mall. The follow up to the Mac & A.K. release in 2004, was Hustle Music Vol. 1, which is still a hot seller globally and in the Bay. The most recent album titled Legendary was released in 2007 and was one of their most successful projects to date.

With E&K Music Group, Eric and Keith Gordon has been able to do what true independent artist do and that is have creative control over their music and usher in ideas that are effective in reaching their core audience