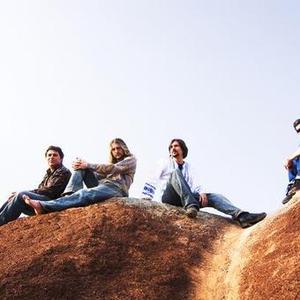 After two years of rocking the Toronto psychedelic music scene, Luz Atomica have released their self-titled debut album. Who are these guys? Well, if Pink Floyd and The Stooges were to have a love child, Luz Atomica is definitely it. Spill Magazine says "From the depths of a sound crafted in the mid to late 60's psychedelic era emerges one of the coolest sounding bands that have come out of Toronto."

The band crafts hypnotizing soundscapes, right until they stomp on the fuzz and put their songs into interstellar overdrive. Lonely Vagabond (perhaps Toronto's most renowned independent reviewer) writes: "The Cameron House was the scene, as the full-house demonstrated, witness to a balls-out psych-fest." Or as Toronto's own Psychedelic Commune says: "Luz Atomica ? rocked the Smiling Buddha so thoroughly? that we had to ask them back. These guys are so trippy, even the most hardcore Christian Conservative would be tempted to get high for their set."

Luz Atomica's late-sixties style light show has become a staple of their live performances. Fans leave with ears that are ringing and eyes that are swirling. Unfortunately the psychedelic light show cannot be provided on their debut album. But their "radioactive rock n' roll," as Le?n calls it, has never sounded better. Too High To Get It Right says "Luz Atomica's self titled debut is 56 minutes of stonery goodness" and Spill Magazine calls it is "an amazing debut CD . . . which I am sure will be turning some heads in the near future."

The ten-track album is available through this website, at local music stores, and all major online retailers.