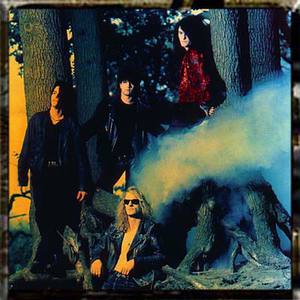 LOVE LIKE BLOOD - the story of a Gothic Rock legend. 10 years, a pretty damned long time and one which is of course not completely documented by recordings. The nucleus of the 4-man band still consists of the Eysel brothers: Yorck, the younger of the two is responsible for the typical LLB-vocals and most of the lyrics and Gunnar, the bassist, who prefers to stay in the background. Their first release was on their own label Deathwish Office, which caused quite a stir in the years to come. It all started with 1989 "Sinister Dawn" 4-track vinyl EP.

Their first release was on their own label Deathwish Office, which caused quite a stir in the years to come. It all started with 1989 "Sinister Dawn" 4-track vinyl EP. The next step in the story was entitled "Flags of Revolution" which came on the market in 1990 as being a typical album for that era, containing serious political statements of the band. This year marks also the first line-up change. Peter B?chele (guitar) left the band and has been replaced by Stephen Noschilla. Nevertheless "Flags of Revolution" has been the album which entered several alternative charts and can be described as their breakthrough album. Love Like Blood returned with the 5-track Mini-Album "Ecstasy" in 1991. A midsize album in between many tours across Europe, which mainly has been dedicated for their fan base. This Mini-Album contains their first cover song of a neverending series. The Rolling Stones-Cover "Angie" proves that the band does not shy away from doing cover versions of bands who have made Rock history.


April 1992 the single "Kiss & Tell" was the first release on Rebel Records / SPV and thus the start of a long-term and successful collaboration. 1992 saw a flood of releases, much to the delight of the fans. Further again the band changed their guitarist position. Mark Wheeler from now on has been in charge for about 2 years. In September came the album "An Irony of Fate", in October the re-releases of "Sinister Dawn/Ecstasy" and "Flags of Revolution" and finally in November the single "Demimondes" followed, which all together displayed an abundance of innovation.

On "Stormy Visions", the pre-release single for the album "Odyssee", released in October 1993, goes one step further in a very dancefloor-orientated direction, prooved by a truly techno-id mix of the title track. The album release in January 1994 again was followed with a crash of the line-up. Mark Wheeler has been dropped and replaced by the guitarist Colin Hughes. Some remixes and the incredible David Bowie cover "Heroes" been released shortly after the album on the Single "Flood of Love", more in the typical Love Like Blood realms.
A year later "Exposure" saw the daylight in October 1995 and broke the silence. Mixed at Parr Street Studios in Liverpool (UK) and produced by Pee Wee Coleman. One of the most influential German band now sounds really fresh, yet keeps the roots but showing itself more from the Metal side.


In January 1996 the band rushed into their most serious crisis ever. The band cancelled their 6 weeks Europe tour and felt into deep depressions. Many rumours spread around about a band split, their retirement.
No official statements, no news for about 1 1/2 years until the Demo Single "Taste of Damocles" been released as an offical announcement. The band from now on consists just by the brotherhood and founding members Yorck and Gunnar Eysel. Former guitarist Colin Hughes as well as dummer Joxx Schmid retired. But the main heads of the band continue what they have started about ten years ago.
So it's no wonder that in February 1998 in time of their 10 years anniversary with a big bang the advance Mini-Album "The Love Like Blood E.P." was released. A new chapter is opened, a fresh, highly motivated band returns and again is setting new standards.
Their anniversary E.P. as well as the follow-up album "Snakekiller" have been recorded with numerous highly reputated musicians as there are AC (drums, Lacrimosa), Esa Holopainen (guitars, Amorphis), Ed Warby (drums, Gorefest), Frank Schwer (guitars, Silke Bischoff), Frank Weyzig (Born For Bliss), Susan D'Ivallo (vocals, Moonchild) and finally Peter T?gtgren (producer, Dimmu Borgir, Hypocrisy, Edge Of Sanity.....)

Chronology Of A Love-Affair

An Irony Of Fate