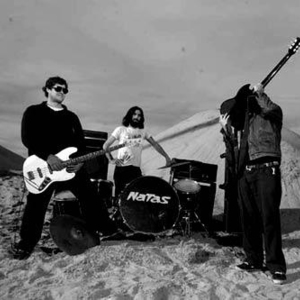 Los Natas (or Natas) is an Argentinian stoner rock band formed in 1994 in Buenos Aires, Argentina. In their latest releases they have been steering away from the genre and leaning towards a more experimental sound coined by them as free rock. Their musical influences are numerous and varied, having the base of the raw and psychedelic sound of 70's bands such as The Doors, Black Sabbath, The Who, Pink Floyd and Hawkwind, among others.

Their musical influences are numerous and varied, having the base of the raw and psychedelic sound of 70's bands such as The Doors, Black Sabbath, The Who, Pink Floyd and Hawkwind, among others. Los Natas propose a journey made of basic elements: valvular equipment and vintage instruments, they incorporate the use of the senses and perception of the listener as a part of a sonic trip. They make music that changes constantly, supported by long jams that give them a different meaning every time they execute them having that way a sense of freedom in the way of interpreting the sounds, making this experience extremely related to the sensations that both the musicians and the audience receive every time a show begins.

Since 1998, the music industry noticed the existence of bands with this musical influences spread around the globe. The scene was growing with the edition of CDs and vinyls emerging as a new culture under global codes: the same love for music and the sound. As an answer to the mainstream it began this new trend under the name of stoner rock. Nowadays the sound and music of Natas goes beyond this classification, with the incorporation of Argentine folk instruments and the creation of ambiance which makes the classification of the band in one genre very difficult.

Los Natas toured around the United States (1998/99/00), Europe (2003/04) where they shared stages with important bands of the genre such as Queens of the Stone Age, Nebula, PORN, Unida, Dozer, Circle, Colour Haze, Brant Bjork, among others. They have been doing a bunch of theme oriented gigs / festival that where created by them called Viernes Verdes (Green Fridays) that has had 10 editions so far and it takes place in Buenos Aires's main theaters, the band plays while there are psychedelic projections in the background which gain such importance as the band itself. They also present in other provinces of the country and in numerous places in Buenos Aires.