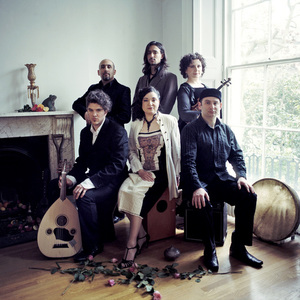 ?Los Desterrados take the music of the Sephardic Jews, with its strong Latin influences, and drag it effortlessly into the 21st Century with lashings of Spanish folk and Balkan soul.' London Metro Los Desterrados ? ?The Exiles' ? weave soul, jazz, flamenco and folk influences into the Mediterranean music of the Sephardic Jews. Based in London they formed in 1999 and cut their teeth in London's thriving world music scene.

Miradores is the band's new album and was produced by Simon Edwards, former member of Brit Award-winning 80s band Fairground Attraction, who has also worked with Kirsty MacColl and Billy Bragg.

Sephardic music has recently taken its rightful place on the world music stage thanks to the success of Yasmin Levy and Mor Karbasi, and with Miradores Los Desterrados showcase their spirited interpretation of this tradition. Fusing fiery Balkan and Gypsy melodies with the rhythms of Spain, Morocco and Turkey, Los Desterrados have created a rootsy, contemporary sound that will appeal to fans of the Gipsy Kings and Ojos de Brujo, as well as Levy and Karbasi.

The vocalists sing mainly in Ladino, a UNESCO protected language: it is estimated that between 160,000 and 300,000 Sephardim have some knowledge of the language but the amount who speak it on a daily basis is reckoned to be in the thousands.

In their third album, Los Desterrados continue to mine the wealth of ancient Sephardic songs, with its tales of flirtation, love, faith, war, abandonment ? and mothers-in-law. The language may be historic, but the songs are as relevant and powerful today as they were 500 years ago. The band recently took part in a CNN documentary about the preservation of language through storytelling, alongside writers Isabel Allende and Doris Lessing, which was broadcast in August 2008.

Praise for the previous album, Tu
?Richly textured and sensitively recorded, Tu is a vibrant and committed offering. The songs cut a distinctive sound, rhythmically complex and melodically compelling. With well selected songs, passionately performed, this mix of traditional sounds cut with a jazzy tinge will appeal to Gipsy Kings and Radio Tarifa lovers.' Songlines

?North London's Los Desterrados tackle the traditional Sephardic repertoire with rather un-English passion and up-tempo energy. Some of these numbers have been performed for more than a millennium, but the urgency of these performances makes the years fall away.' The Wire

?The throbbing undercurrent of minor key chords is countered by an irrepressible percussion drive and dizzying fiddle arrangements that together tug relentlessly at your heartstrings while making a beeline for your hips.' London Metro

?Los Desterrados use these old tunes and lyrics but bring their own personalities and a fair amount of flamenco to the sound. Much of the memorable repertoire is slow and lyrical, but there's bravado too. Opening track ?Avre Tu' is almost Gipsy Kings in its Latin fire.' London Evening Standard