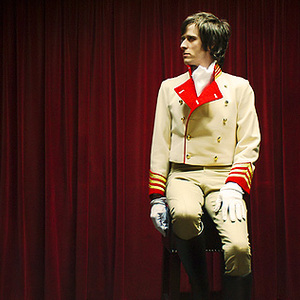 Lord Cut-Glass is the current stage name of Alun Woodward, a Scottish singer-songwriter from Motherwell and formerly of the influential Glasgow-based band The Delgados. The name, Lord Cut-Glass, comes from a character in the Dylan Thomas radio play Under Milk Wood. The first full-length album Lord Cut-Glass album, self-titled Lord Cut-Glass, was released in 2009. Woodward has also contributed two other tracks under the moniker of Lord Cut-Glass.

Woodward has also contributed two other tracks under the moniker of Lord Cut-Glass. The first, "A Sentimental Song", released in March 2007, was part of the Scottish indie/folk compilation Ballads of the Book with lyrics written by the author Alasdair Gray. It was released by record label Chemikal Underground which, as part of the Delgados, Woodward helped create in 1995. The second track, "Maybe", was released as part of the compilation Worried Noodles.