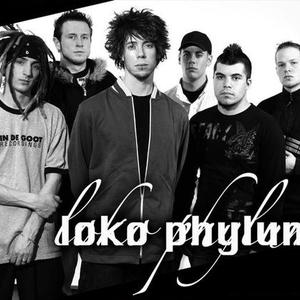 Loko Phylum formed in 2000 in a suburb just outside of Pittsburgh, PA. They have toured many of the nation's largest cities and have built up an impressive base of loyal fans. With current statistics on the Myspace.com community reaching 48,000 eager friends and over 175,000 plays to date, Loko Phylum's online presence is also established. They dedicate all of their time towards keeping in close touch with their fans, promoting, writing new material and touring.

After releasing their debut album ?sex sells:sex kills? in June of 2005 the response that they are receiving from their national fan base is overwhelming. There is a significant amount of diversity in Loko Phylum's ?sex sells : sex kills? due to the creativity expressed in the blending of multiple genres by which the members are each influenced. Loko Phylum's ?sex sells : sex kills? is filled with everything from soothing guitar melodies to movements of enraged havoc and riddled with unforgettable vocal hooks, while retaining a prominent rock foundation. The album is available online exclusively through smartpunk.com or can be bought at various retailers nation wide. Along with brief stints on the 2005 Taste of Chaos and 2006 Warped Tour they have also have shared the stage with such national acts as The Used, My Chemical Romance, Underoath, Bleed the Dream, Family Force 5, My American Heart, A Static Lullaby, Killswitch Engage, Senses Fail, The Kottonmouth Kings, Adema, Zebrahead, Saosin and Gym Class Heroes to name a few. ?27 Kisses? receives air time on numerous radio stations in select markets. After recently completing a successful self promoted nation wide tour Loko Phylum is now seeking label support.