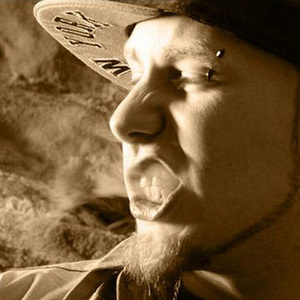 Originating as a vocalist in the metal scene, Lo Key began his musical journey in 1998 performing with the hardcore rap group Anonymous Tip. "I couldn't sing. Or scream or anything. It was kind of put up or shut up, I had to do something. So I started spittin', and we started makin history." After 2 years with the band, Lo Key called it quits and started recording hip hop with band mate 100 Proof. Only 2 tracks are rumored to exist, "The Truth", and "Bottle Dreams (OG)". "At first we didn't know what the fuck we were doing. We just wrote

in 1998 performing with the hardcore rap group Anonymous Tip.

"I couldn't sing. Or scream or anything. It was kind of put up or shut up,
I had to do something. So I started spittin', and we started makin history."

After 2 years with the band, Lo Key called it quits and started recording hip hop
with band mate 100 Proof. Only 2 tracks are rumored to exist, "The Truth",
and "Bottle Dreams (OG)".

"At first we didn't know what the fuck we were doing. We just wrote
random shit down and rapped it. I was experimenting with my style for a
long time. I'm still progressing as an artist and I think that's what keeps
people listening, and outsiders to start listening."

"I had been listening to wicked shit for a while, but never really considered it as
a direction I could take musically. But I realized that scene was ME, musically
and in real life. We live wicked, the whole world around us is horrifying.
So I decided I wanted to reflect that in my music."

With a new vision to complete, Key started the group "Temple Rain" with friends
and fellow lyricists Sleepy & Appirition. In 2003 they released theyre debut LP
"The Awakening", a fusion of hip hop and horror. Boasting 19 tracks,
the LP was given away free on the internet and localy.

"The Awakening was a strange time for the 3 of us, I guess we were all
going through a lot of personal shit and you can definitely hear that on the
album. We actually recorded subliminal suicide messages, and shit like
that behind every song. Looking back I can say I have changed alot
since then"

Shortly after it's release, "The Awakening" and all Temple Rain merchandise
was banned in 3 Pennsylvania schools for "promoting / condoning mass suicide
and / or gang violence". This gesture created a stir in the PA underground.

"They said Temple Rain on the news and showed our website, and at the time
we were offering The Awakening free to download. Suddenly we had 300-450
people A DAY getting the CD off the site. It was crazy as hell man"

After being temporarily shut down on several occasions the hype died down
and things appeared to return to normal for the trio. Slipping back into
the studio the group started they're newest project : "The Lost Boys EP"


"Basically, for the EP we were going for a more hip hop feel. There were alot
of people getting into us at that point and we delivered a bomb ass record.
Things seemed to be goin good for us at this point, we did that CD
in 1 month with no outside help or anything."

Around July 2004, Temple Rain went on hiatus to record a full length LP.

"Well there was alot of drama goin on around this time. I don't really want to get
into specifics out of respect for my people but things started fallin apart. Me
and Sleepy got a few tracks done, then we finally decided to call it quits. I
had opportunity elsewhere and he needed a break."

In late 2004 Lo Key moved to Nashville, TN to pursue his dreams of making music
and to continue his journey through the recording industry.

In 2005, Key stepped into new territory when he produced
Madd Maxxx - In The Absence of Sanity, alongside Devize and Fritz
the Cat. Ranging from the emotional piano driven "Saving Grace"
to the hard hitting school shooting based "Classtime Horror", the debut EP
was also Loke's production debut.

"I had mad fun doing that record with him (Maxxx). I literally met that dude
by accident, when he had nothing more than a notepad full of rhymes and
a head full of ideas. And look at him now, his debut EP tops anything
in that genre and cats that been doin it for years. That's something I take
pride in."

In March of 2005, 7th Seal Entertainment and Lo Key released a free, 23 track
full length LP entitled "Repressed Memories". Consisting of rare, unreleased,
and unheard music from the proceeding 4 years, the album was offered free
to download via the 7SE website and given out locally.

"We dropped that shit for our people. Nobody else was putting out QUALITY
free music like that since Tech N9ne did it, and we were hearing alot of
different labels brag about hooking up they're fans, so we strait up took every
piece of material we had and gave it away. For nothing!"

In June 2005 Lo Key released his first solo effort, "Follow Me",
a free EP showcasing his lyrical ability not often seen in the wicked underground
genre. Consisting of 5 tracks, the CD is available to anyone at lokeymusic.net.

"Follow Me is a fuck you to alot of people who doubted me, who said
I should give up and quit doing this wicked shit.. People who live
in a sheltered reality afraid to break away from the worlds
web of madness. It's a big fuck you to those people. You COULD say
it's directed towards THE WORLD, but that's what everyone says."

In October 2005 Key dropped ANOTHER free album, "The House" criticly acclaimed as
"A Horror Masterpeice", "One of the BEST Horror CD's EVER!", and "The Crowning
of a New King of Horrorcore". Featuring production by himself, Stitch Mouth, and
Relapze (as well as collabs with both, and former Temple Rain member SLEEPY), the
album generated over 500gb of downloads in 4 days.

In August 2009, Lo Key posted a MySpace blog announcing that he is walking away from the music industry.