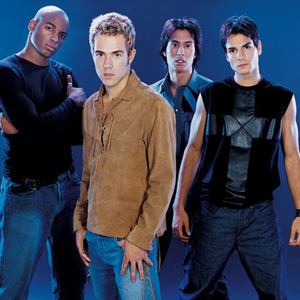 LMNT is a boy band originating back in the 90's. The boy band is not your typical boy band, the group consists of 4 member instead of the traditional 5. (Other bands like LFO have joined in breaking the mold) LMNT is a diverse option to the typical boy band/pop vocal artist. Ikaika Kahoano wanted more than his allotted 15 minutes of fame. It wasn't enough that the 24-year-old Iolani School graduate became a member of the pre-fab boy band O-Town on ABC's "Making the Band" series back in March through May 2000.

Ikaika Kahoano wanted more than his allotted 15 minutes of fame. It wasn't enough that the 24-year-old Iolani School graduate became a member of the pre-fab boy band O-Town on ABC's "Making the Band" series back in March through May 2000. It was a group he would quit in disgust soon afterward, returning home to friends and family. The son of entertainers Kimo and Lynette Kahoano would soon form the group Ano with his younger brother Kamuela, with the encouragement of older brother Haku.

Ikaika Kahoano's return home would last all of three months. Without a warning to his family, he headed for New York City to hook up with two "Making the Band" finalists he befriended, Bryan Chan and Mike Miller, to make another go at a mainstream entertainment career. Jonas Persch rounds out the quartet dubbed LMNT (pronounced "element," a name picked from a Teen People-sponsored online contest).

Group members hope there's still enough gold to be mined from the * boy band phenomenon, and will find out soon enough as Tuesday marked the nationwide release of LMNT's debut album, "All Sides." In a couple of phone interviews with Kahoano from New York, once during a noisy album release party * Tuesday and a day later, he was candid about his life-changing experience. "When Bryan told me in March of last year that he wanted me to join him and Mike, I originally told him I didn't want it," he said. "I was still pretty bitter about the whole * O-Town experience. I just didn't get along with the other guys in that group. I didn't respect them both on a musical and personal level. There was just no love there. "Even though there was no trash talk between us, it was still just a wack, ugly situation. I'm cool with them now and wish them all the best, but at the time I had to get out."

LMNT started touring last summer and performed during last year's Hula Bowl halftime show. The group's initial single release, the pop confection "Juliet," spent eight consecutive weeks as the No. 1 song on * Radio Disney. It was written by Epicentre, a duo from Stockholm, Sweden, who, not surprisingly, has also worked with * *N Sync. (Note: This song and the album opener "Girl Crazy" are made to set prepubescent girls' hearts aflutter while giving this aging male a sudden case of diabetes. In defense of "Juliet," however, the accompanying video that can be accessed via CD-ROM drive made the tune more bearable with its cute and clever laundromat fantasy scenario, complete with a cameo from Jamie-Lynn Sigler of "The Sopranos," who shares the same manager as LMNT.)

Now LMNT and Kahoano's high tenor voice and photogenic looks will be featured on two summer tours this year, one for Radio Disney, the other as the opening act for * Britney Spears from June 20 to July 6, with 11 dates between the Midwest and Northeast Coast. WHEN KAHOANO came back home after the * O-Town fiasco, he found it was too late to re-enroll at the University of Hawaii-Manoa, where he had a year left in his biological studies en route to becoming a pediatrician. But being back didn't make him feel as good as he'd expected. "I now felt I didn't belong," he said. "I was looking for regular work, tutoring a bit, but individuals like me like a lot on their plate, and even though friends helped me get the odd job, Hawaii didn't feel like the place I was supposed to be in. "I felt I had no choice but to move back to the mainland after I called Bryan back and told him I wanted in. In fact, my family didn't even know I went back until I called my mom from New York City, telling her of my decision. While my parents were initially disappointed, they understood where I was coming from. "It took a couple of friends of mine, Eric and Chris, to set me "* straight". We were just sitting around on Lanikai Beach one day, talking, and they told me that my * O-Town experience was my 'in,' even though it ended up wack -- that I was the only one that could've done that stuff, and that, no matter how much they could've worked at being in show business, they didn't have the gift I was given. "They helped me realize that I have this God-given talent, even though my parents tried to push me away from the entertainment life they had -- not going to college, getting married right after high school and raising a family. And at first, even though I'd go with my dad to his gigs, I didn't look to pursue a career in entertainment. My parents wanted me to continue my schooling, but I had a taste for performing as early as high school, where my brother and I were in an a cappella group. "So I've surrendered and stopped fighting it. My friends have told me -- and I've come around to their way of thinking -- that I have a voice and a look, as well as the dance moves and good health, to pursue this career. And with my trust in God, I hope I can bring some light into this world with this group. "THE LONGEVITY of LMNT is dependent on the multiracial group (described by Kahoano as "humble individuals, not at all badasses or rock stars -- we're just four mama's boys!") gaining national airplay on radio stations that cater to an audience that's outgrown the * Radio Disney playlist.

To these ears, four of the 11 tracks on "All Sides" could help LMNT break out of teeny-bop mode. One of them is "Shangri La," produced and written by the Norwegian team Stargate (worked on hits for * S Club 7 and * Cher), which has a bit of a robotic, hip-hop feel to it. Another Stargate track, "Hold Me Down," sounds too much like a lightweight version of the kind of skittish, chopped-up rhythm work Missy "Misdemeanor" Elliott and *Timbaland have already mastered. "Keep It Coming," a contribution by L.A.'s Soulshock, who worked with * Mary J. Blige, 2Pac and Destiny's Child, takes a light, persistent approach Kahoano would like to work at. He said he also likes the tracks LMNT did with veteran New York session musician-producer Jimmy Bralower, who's also worked with the * Backstreet Boys. "Greatest Gift" and "It's Your Love" are two of the songs that are the closest in generating real emotion, thanks to the help of studio musicians. "It's just a matter of a series of doors breaking down in order to build up radio airplay that will help us in the long run," Kahoano said.